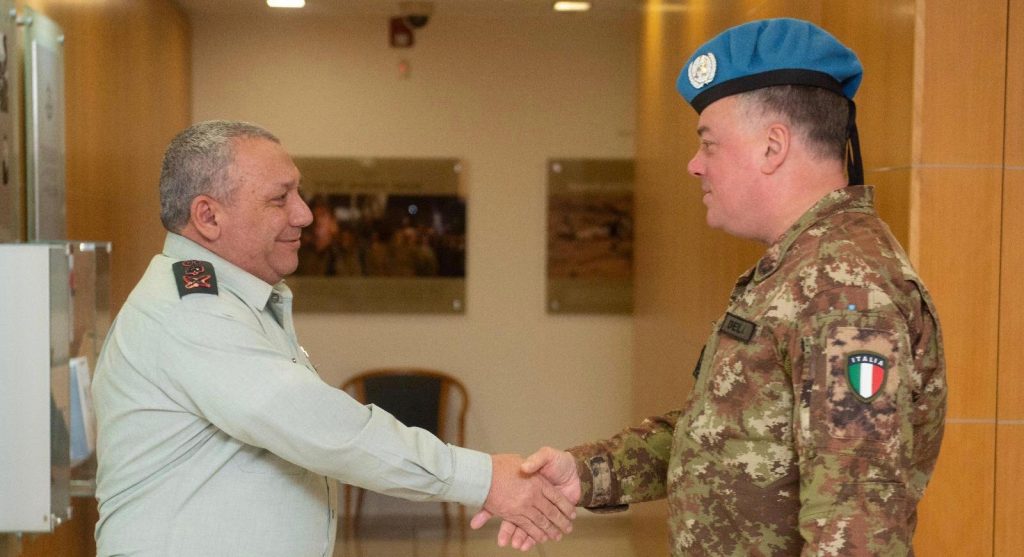 IDF chief Gadi Eisenkot met with the head of the Lebanon-based U.N. peacekeeping force UNIFIL Maj. Gen. Stefano Del Col on Sunday, calling on him and the Lebanese military to destroy the cross-border attack tunnels that Hezbollah has dug into northern Israel from southern Lebanon, the army said.

“IDF Chief of Staff Lt. Gen. Gadi Eisenkot showed [Del Col] the operation’s progress and noted the importance he sees in UNIFIL troops working to neutralize the tunnels on the Lebanese side,” according to an IDF statement.

The two met at the Israel Defense Force’s headquarters in Tel Aviv.

Eisenkot said the Hezbollah tunnels were a violation of U.N. Resolution 1701, which ended the 2006 Second Lebanon War and required all army groups besides the Lebanese military to remain north of the country’s Litani River.

UNIFIL and the Lebanese Armed Forces are tasked with enforcing the U.N. resolution, and have often been criticized by Israel for failing to do so.

Meanwhile, late Sunday, the IDF issued a warning to Lebanese citizens to “temporarily leave” homes situated over the Hezbollah tunnels, as it prepared to destroy their extensions into Israeli territory.

“Hezbollah built terror tunnels under Kfar Kila and Ramia that infiltrate into Israeli territory, making the area a barrel of explosives,” read a Twitter post by the IDF’s spokesperson for Arabic media Maj.Avichay Adraee. “We are determined to neutralize these tunnels, and we do not know the outcome of these actions on the relevant buildings on the Lebanese side.

“Is it not time for you to insist that Hezbollah give you clear answers?” he continued. “Are you living in safety when you know that your houses are located above a barrel of explosives? We recommend that you thoroughly consider temporarily leaving the relevant buildings for your safety.”

On Sunday, the Hezbollah-affiliated al-Manar website said the Lebanese army reinforced its units on the border with more vehicles and artillery, to “prevent the Zionist army from putting demarcation marks on the Blue Line. Lebanon and Hezbollah claim that Israel has encroached on Lebanese territory.”

Despite the tensions, UNIFIL spokesman Andrea Tenenti said no violation of the Blue Line has been recorded, and that the situation remains calm, with U.N. peacekeepers present on the ground to monitor the situation and maintain stability.