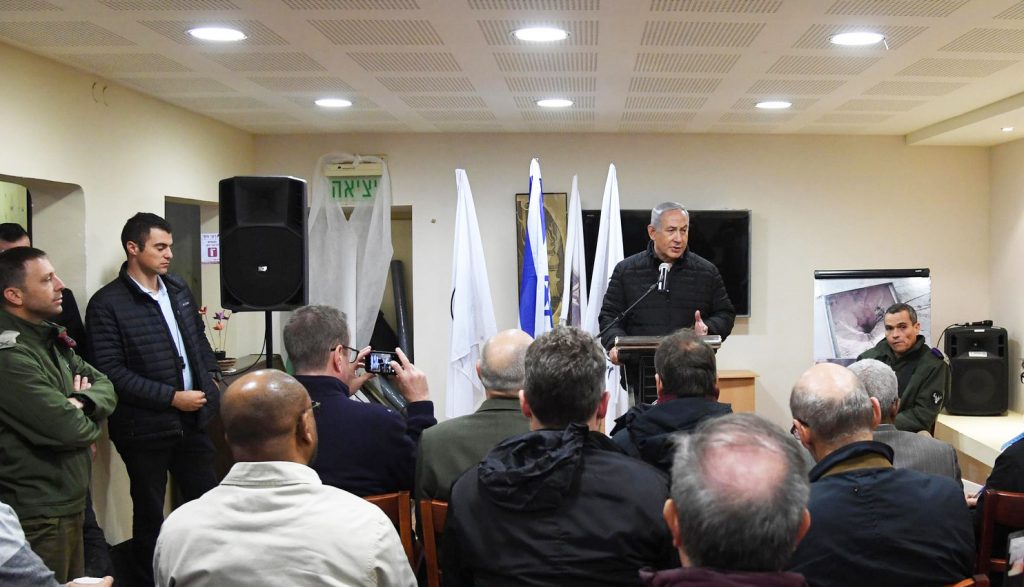 Prime Minister Binyamin Netanyahu met Thursday morning in Misgav Am with foreign ambassadors about Operation Northern Shield, near the IDF forces that are operating to expose and neutralize terror tunnels.

Israel is acting “systemically and with determination” to deny the Hezbollah and Hamas terror groups their strategic tunnel weapon, Netanyahu told the ambassadors during the briefing.

“We will act as long as needed,” he added.

“Whoever attacks Israel – his blood is on his own head. Hezbollah knows this and Hamas knows this,” Netanyahu said.

Netanyahu later said that he told the ambassadors that they should condemn the aggression by Iran, Hezbollah and Hamas unequivocally, and also intensify the sanctions against these elements.

“This operation [Operation Northern Shield] is at its beginning,” he said, “but at the end of the operation, the terror tunnels, in which Hezbollah invested so much, will no longer exist and will not be effective.

“Israel’s expectation is unequivocal condemnation of Hezbollah, additional sanctions on Hezbollah, condemnation and demand from the Lebanese government to stop granting allowance to use its territory for these attacks on Israel. All this will be raised at the upcoming U.N. Security Council meeting at Israel’s demand. This is an important diplomatic step that complements our engineering efforts to deprive Hezbollah and Iran of the tunnel weapons.”

The ambassadors were briefed by Northern Command Chief Yoel Strik and the head of the Planning Directorate, Amir Abulafia, and toured the tunnel area exposed by IDF forces earlier this week.

One diplomatic official said that the purpose of the briefing with the foreign ambassadors was to create legitimacy for future military actions, if the need arises.

Meanwhile, a senior Israeli official said that while Hezbollah had planned to develop thousands of missiles, in practice the terror group has only managed to develop dozens.

“We have disrupted their plans with dozens of actions … which have brought about a significant slowdown in their program,” the official said.