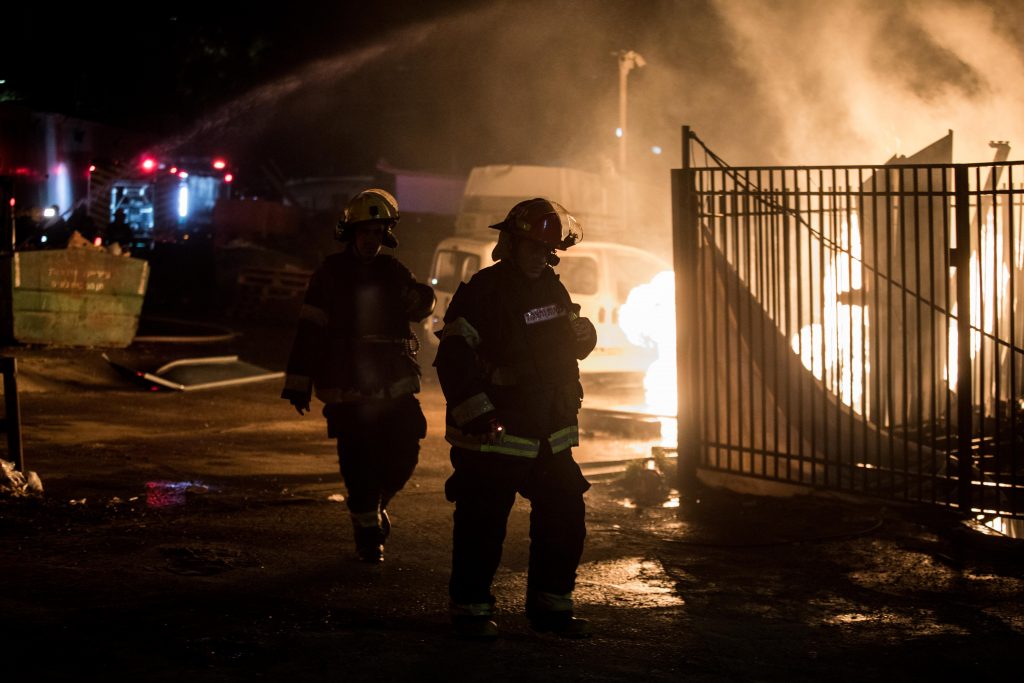 Red Alert warning sirens sounded throughout southern Israel Tuesday morning as Hamas continued its barrage of Israel’s south – threatening to target Ashdod, Be’er Sheva, and points beyond. The threats came as Israel was beefing up its military units along the Gaza border in apparent preparation for a land operation, to supplement the ongoing air attacks that saw Israeli planes destroy over 150 “high quality terror targets,” according to the IDF spokesperson.

On Tuesday morning, the IDF said that it had destroyed a Hamas installation used to gather intelligence and develop weapons. The building is located in a residential area in Gaza City.

Since Monday afternoon, well more than 400 rockets have been fired at Israel, with one hitting an apartment building in Ashkelon. There have been dozens treated for injuries resulting from shrapnel, as well as for shock, but so far only one person – an Arab from Yehudah and Shomron who was in Israel illegally – has been killed.

IDF spokesperson Ronen Manulis said that Israel would continue to hit Gaza. “If need be we will expand our range of targets. Hamas has broken all the rules this time,” he said. In a letter to Prime Minister Binyamin Netanyahu, Ashkelon Mayor Tomer Galam said that Israel needed “to shock Gaza, until they understand that it is not us who should be taking cover, but them.”

Among the targets hit by the IDF overnight in Gaza were a terror tunnel, several headquarters of Hamas and Islamic Jihad, and an “important naval target,” the IDF said. In addition, Israeli planes have been targeting buildings inside Gaza City that may be homes of some of the leaders of the terror groups. Hamas said that if Israel did not halt its bombing of these targets it would expand its attacks to other cities in Israel.

School has been canceled in nearly all communities in southern Israel, as far north as Kiryat Malachi. Residents of Ashdod and Be’er Sheva have been instructed to remain close to bomb shelters, and any public outdoor gatherings are banned. Residents of Netivot and Ofakim have been told to remain in bomb shelters or protected areas throughout the day.