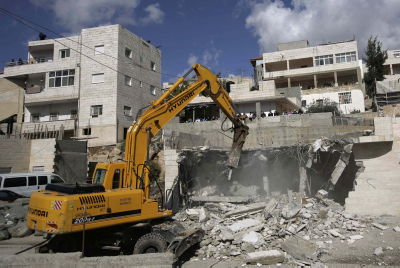 Since 2014, a total of 54 homes – just 30 percent of the ones that orders were issued for – have been demolished in Yehudah and Shomron. The homes belong to terrorists or the families of terrorists who have killed, or attempted to kill Jews in terror attacks. The figures were revealed in a discussion Wednesday by the Knesset Foreign Affairs and Defense Committee, after families of victims of terror attacks demanded answers on why it took so long to carry through on demolition orders.

MK Moti Yogev (Jewish Home) said during the discussion that home demolitions were effective in discouraging terrorism, and that the pace of demolitions should be stepped up. Yogev said that he was sponsoring legislation to speed up the process, but “unfortunately it is being held up by the Ministerial Law Committee. We will continue to push for speedier demolitions, as this is an excellent tool to discourage terrorism.”

Representatives of numerous families who recently lost loved ones to terror attacks testified before the Committee. In an emotional letter to Prime Minister Binyamin Netanyahu earlier this month, several families whose loved ones were killed by terrorists demanded that the government immediately demolish homes of terrorists who murdered Israelis. “We do not want to see additional Israeli deaths,” the letter reads. “The only way to this is to place fear in the hearts of potential terrorists,” with steps such as demolishing their homes and making their families homeless.

The letter was signed by members of five families who have lost loved ones to terrorists in recent months, including the family of Lubarsky, as well as the families of Adiel Kolman, Hy”d, Avraham Hasno, Hy”d, Tuvia Yanai, Hy”d, and Ari Fuld, Hy”d.

In the letter, each family describes the murder of their loved one, and the difficulties they themselves faced as a result. “One thing is clear,” the letter said. “The demolition of houses of the families of terrorists immediately after an attack has an effect of discouraging future attacks, sending a message that there is a heavy price to be paid for murdering Jews. That it is not worth it for them to become ‘martyrs’ or even to go to jail.

“Unfortunately, the IDF and the security establishment refuse to demolish terrorists’ homes,” the letter said. “The continued existence of these terrorists’ homes is practically a guarantee that there will be another attack. You do not beat terror in the High Court – you beat it with an iron fist. Use the fist; our loved ones will not return, but we can help prevent suffering of other families in the future,” it added.