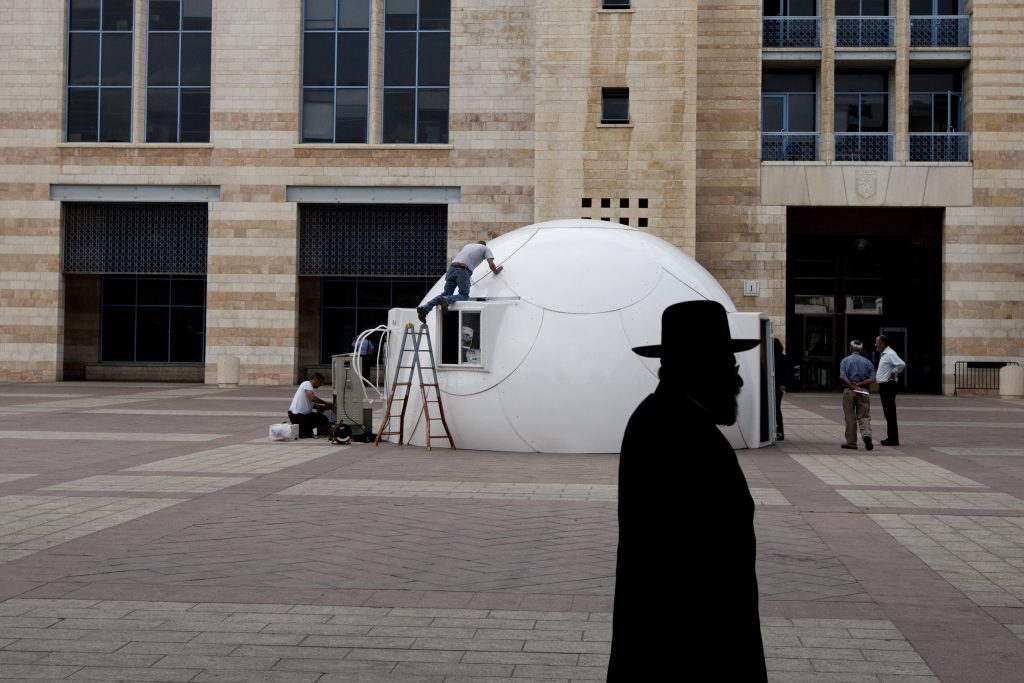 The municipal elections in Yerushalayim are heating up, and a harsh internal conflict is raging within the religious Zionism community.

In the new campaign that was unveiled Monday by Yediot Acharonot, the candidates for mayor Ze’ev Elkin, Moshe Leon and Ofer Berkowitz are dressed in chareidi garb and long peyos with the caption: “While they are anxious for their fate, we will stop the influence of the chareidim.”

Chagit Moshe, head of the local Jewish Home faction, explained to Yediot that “it is in the supreme interest of the residents of Yerushalayim and the religious Zionism that Yerushalayim will not become Bnei Brak … We have nothing against the chareidim, but the reality of life proves that turning Yerushalayim into a chareidi society disturbs the Zionist and secular public.”

“No matter who heads the city, Elkin, Leon or Berkowitz, they must not stand alone against the chareidim. The more religious Zionism becomes a stronger and bigger factor in the coalition, the more we can ensure that Yerushalayim will be the capital of all Israeli society, not of a small sector.”

Since Monday morning, there has been widespread condemnation of the campaign and anger in the social networks against the vile anti-chareidi campaign.

“We hope and trust that there are responsible adults in the Jewish Home party who will stop this campaign and will not allow the discourse to be dragged into incitement and intimidation,” the Yerushalayim-based UTJ party said in response.

Deputy Mayor Rabbi Yossi Deutsch said, “It is heartbreaking and painful to see the campaign of the Jewish Home against the chareidi public. This campaign is not characteristic of the religious Zionist community in the city. We will continue the good cooperation we have had with its representatives over the years.”

Chairman of the United Torah Judaism faction in Yerushalayim, Rabbi Eliezer Rauchberger, said that “the Jewish Home is apparently in a difficult situation in Jerusalem. As a last resort they decided to try to change the focus to the chareidi public and thus gain more votes. I suggest that they check history and see that anyone who has campaigned on hatred for the chareidi community did not pay off and eventually failed. Ask Yair Lapid, whom you are trying to emulate.”

Jewish Home leader Minister Naftali Bennett condemned the campaign and said that “the Jewish Home strongly condemns the campaign that was published this morning by the party’s branch in the municipal elections in Yerushalayim. The campaign was not carried out by the party’s national leadership, and does not represent its position on the chareidi public. This is not our way. We believe in the connection and dialogue between the different parts of Israeli society, and not in increasing the polarization. “

MK Rabbi Michael Malkieli (Shas), who served as a member of the Yerushalayim city council, responded to the ad: “The Jewish House party, that received a single mandate in the last elections for the Yerushalayim council, thinks that if it goes out against the chareidi sector [it] will help them in the elections.

“I recommend that you rather invest your time in your inner unity within the religious Zionist community in Yerushalayim. Leave us alone; from attacking the other, no one gains.”

MK Betzalel Smotrich (Jewish Home) also attacked the campaign and said that “a painful and shameful campaign that was published this morning on our behalf in the municipal elections in Yerushalayim was done without our consent and we completely renounce it and demand its shelving.”

Smotrich added: “I would like to personally apologize to those who have been hurt by this, and we will investigate and make sure that such serious mistakes are not repeated.”