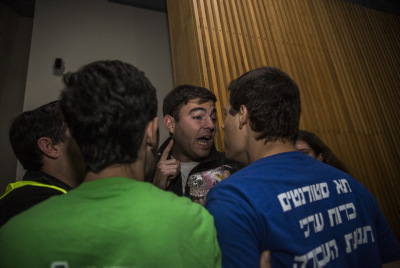 The Knesset late Monday approved on its second and third reading a law to ban representatives of leftist groups from speaking in Israeli schools. Known as the “Breaking the Silence” law, the measure will prevent representatives of that group, as well as others that “seek to deligitimize the government of Israel and the IDF” from speaking to students in school, the law states.

The law is directed against individuals who are invited as guests by teachers and schools to discuss issues of the day with students. Many students, and parents, have complained in the past that their children were exposed to speakers who encouraged them to avoid IDF service, and denigrated the work IDF soldiers were required to do while on patrol, including using anti-riot measures to quell unrest by Arabs, and the like. A last-minute rider to the bill expands the ban to representatives of anti-Israel groups from abroad who are visiting Israel.

Education Minister Naftali Bennett, who sponsored the law with Jewish Home MK Shuli Muallem-Refaeli, said that “the ability of groups to undermine the legitimacy of the state and to insult our soldiers is now at an end. Breaking the Silence and similar groups crossed the red line when they chose to take our differences of opinions and internationalize them, bringing in many groups from abroad to sway the debate their way. As long as they continue to operate abroad against the interests of the state, we will not allow them into the education system. If they want to be in our schools, let them keep their activities inside Israel.”

Naturally, the Breaking the Silence people were less happy with the law. “After forcing religion on us, comes the next stage of trying to silence voices the Education Minister disagrees with. He is so afraid of Breaking the Silence that he has to pass a law to silence criticism of the occupation. Bennett seeks to establish a ‘settlement’ reflecting his ideas in the education system, as he has stated in the media – better to shoot at eight-year-old Palestinian children than to remove settlers from their home,” the group said in a statement.