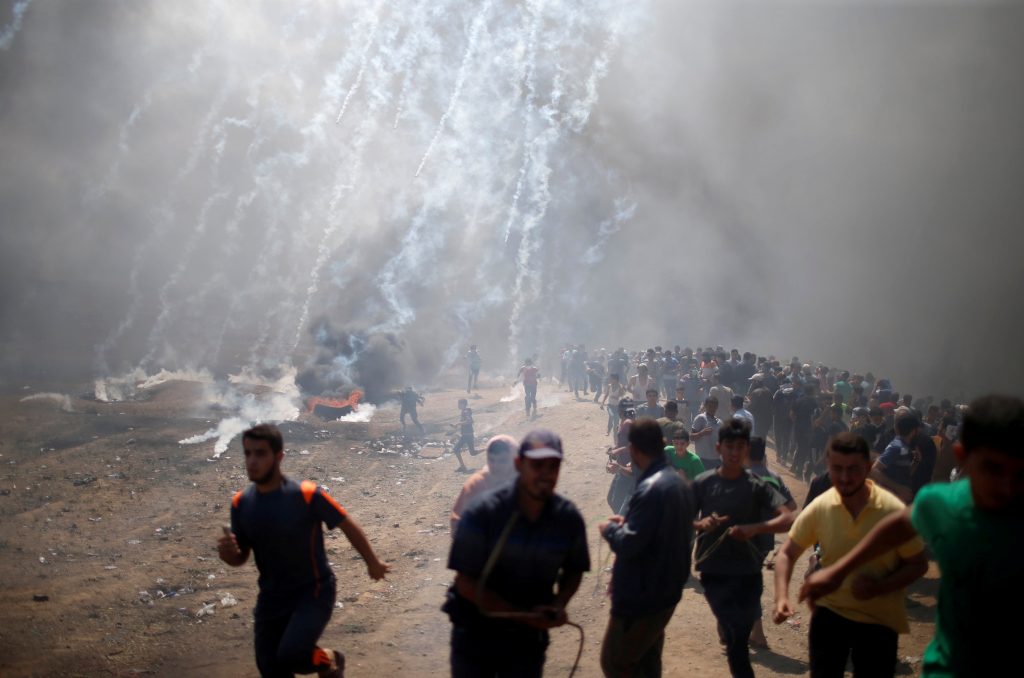 The casualty toll in Palestinian rioting at the Israel-Gaza border on Monday reached 52 killed and over 900 injured as of late afternoon, according to figures provided by the Hamas-run health ministry.

If the numbers are accurate, it would be the most killed in Gaza since the 2014 war between Hamas and Israel.

The IDF estimated that 50,000 Gazans were taking part in the demonstrations at 12 different spots along the border, and that thousands more were gathered behind them, several hundred yards from the fence.

The Hamas-orchestrated Palestinian violence was timed to coincide with the U.S. embassy opening in Yerushalayim. A number of attempts to breach the border fence were made at just about the time of the opening ceremony, 4 p.m. Israel time.

The IDF confirmed that combat planes attacked five Hamas targets in a training camp in Jabalia, in the northern Gaza Strip, “in response to the violent acts of the last few hours being carried out by Hamas along the security fence.” The statement referred to earlier attempts to plant bombs along the fence and fire at Israeli soldiers.

“A short while ago, an IAF fighter jet struck five terrorist targets in a [terrorist] training facility belonging to the Hamas terror organization in the northern Gaza Strip,” the army said in a statement Monday afternoon.

The protestors engaged in burning tires and throwing rocks at the soldiers. An IDF quadcopter was shot down near Jabalia. The IDF fired gas grenades and warning shots at the protestors in response, Ynet reported.

IDF sources were quoted as saying that Hamas was bent on setting off a major new, long-term uprising against Israel, extending into Yehudah and Shomron.

Hadashot broadcast a new Hamas video, which featured Hebrew subtitles, in which young Gaza children were shown saying they would be “returning to our homeland.” The report said Hamas had been spurring the violent protests, and telling Gazans who die in the violence that they will be guaranteed a place in paradise. It said women were prominent among the protesters.

Hamas leaders were hoping to seize control of even a small part of Israeli territory, even for a brief moment, in order to claim a symbolic victory and the start of a “return” to liberate Palestine, according to the report.

Meanwhile, the European Union called for Israel and Hamas to show restraint in Gaza.

“We expect all to act with utmost restraint to avoid further loss of life. Israel must respect the right to peaceful protest and the principle of proportionality in the use of force. Hamas and those leading the demonstrations in Gaza must ensure that they remain strictly non-violent and must not exploit them for other means,” the European Union said on Monday afternoon.

“Any further escalation of an already extremely tense and complex situation would cause again further unspeakable sufferings to both peoples, and will make the perspective of peace and security even more remote. In this moment, wisdom and courage would be needed to go back to negotiations for a political solution, for the sake both of the Israeli and the Palestinian people, and the entire region,” the EU said.