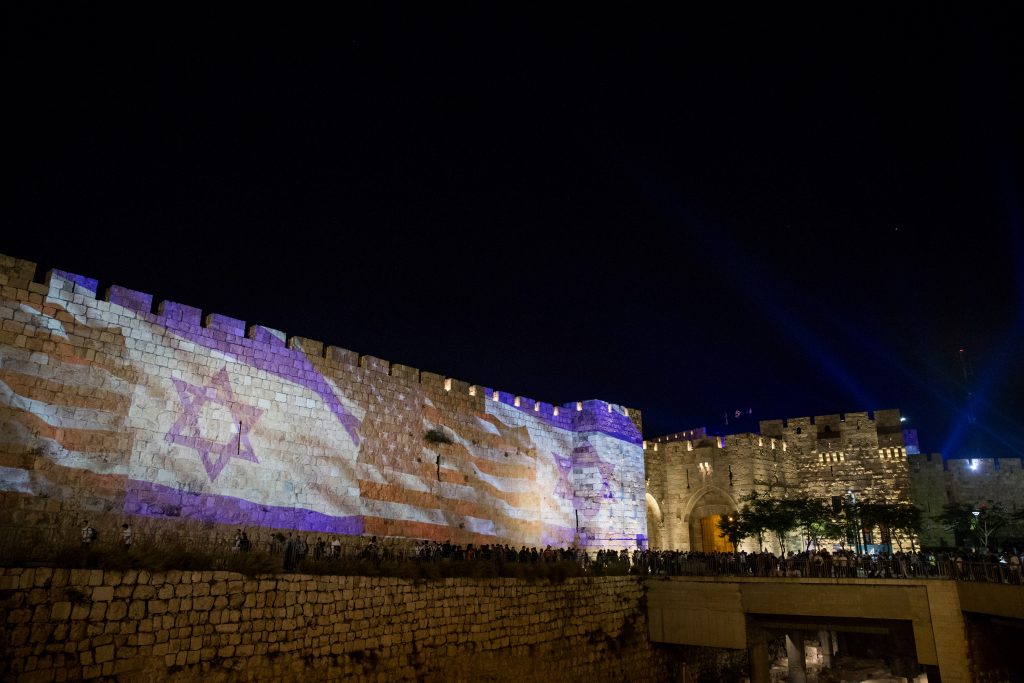 A large American delegation of some 300 government officials and representatives of the Jewish community arrived in Yerushalayim on Sunday to join in the opening of the embassy in the city. The delegation was led by Deputy Secretary of State John J. Sullivan, Treasury Secretary Steve Mnuchin, Special Representative for International Negotiations Jason Greenblatt, and advisors Jared Kushner and Ivanka Trump.

In a welcoming ceremony, Israeli Prime Minister Binyamin Netanyahu thanked the Americans for coming, saying “there are no greater supporters of Israel on the face of the earth.”

Other countries will also soon move their embassies, he predicted, and enumerated the reasons why:

PM Netanyahu also thanked the governments of Guatemala and Paraguay for their decisions to follow Washington’s example, saying that other countries will follow, but “we won’t say who because that’s a state secret.”

The prime minister presented U.S. Ambassador David Friedman with a letter of appreciation engraved on a plaque.

This is “an incredible historical moment,” Mnuchin declared. He promised that the Treasury will be firm in cutting off terrorists’ access to the financial systems “until they change their behavior.”

“We look forward to welcoming you tomorrow at the U.S. Embassy in Jerusalem,” said Mnuchin.

Sullivan said that President Trump’s decision is “essential to creating a roadmap for peace in the region.”

Ivanka Trump came down the gangway of the plane immediately following Secretary Mnuchin, with Jared Kushner right after.

Ahead of landing, she posted a statement saying, “With great joy, I am returning to Jerusalem…I am honored to join the distinguished delegation representing President Trump, his Administration, and the American people at this momentous ceremony commemorating the opening of our new U.S. Embassy in Jerusalem, Israel,” she added.

“We look forward to celebrating Israel’s 70th anniversary and the bright future ahead. We will pray for the boundless potential of the future of the U.S.-Israel alliance, and we will pray for peace,” she concluded.

But while the Americans and Israelis celebrate, much of Europe is sitting it out. Less than half of the foreign diplomats invited to the Sunday evening reception ahead of the embassy opening on Monday will be there, according to media reports.

Out of 86 diplomats who were invited, only 33 ambassadors and chargés d’affaires confirmed they were coming.

A number of Central and Eastern European countries are expected to be represented as well: Albania, Georgia, Ukraine, the Czech Republic, Hungary, Romania, and Serbia.

Austria is the only Western European nation expected to send its ambassador, Martin Weiss, to the event.

The remaining ambassadors are from Asia: Myanmar, the Philippines, Thailand and Vietnam.

Canada, Australia and Germany are skipping the event. Other important countries with which Israel has good ties — such as China, Russia, Argentina and India — are also boycotting the event. As one diplomat explained last week, it made no sense for them to come and celebrate the embassy move, since they have been strongly opposed to it.

Meanwhile, the Foreign Ministry backed down in a contretemps over the guest list for the reception on Sunday evening. After receiving complaints from opposition Knesset members who were left out, the ministry decided to invite them too.

A Foreign Ministry official said the embassy had underestimated the demand. “As soon as we realized that there was a lot of interest in the event, we decided to open it to everyone.”