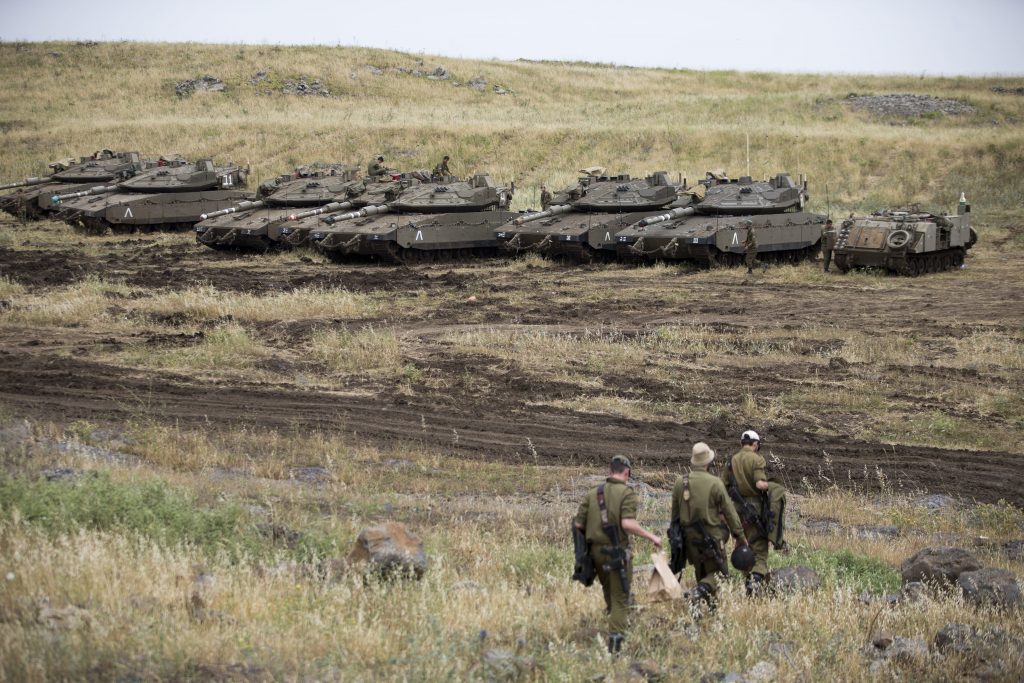 Israel’s defense minister Friday called on Syrian President Bashar Assad to “get rid” of Iranian forces in Syria, warning that their continued presence would only cause trouble.

Iran’s Foreign Ministry spokesman Braham Ghasemi added that Damascus has the legitimate right to respond to what it said were repeated violations of the country’s sovereignty.

A hard-line Iranian cleric threatened that his country would retaliate if Israel “does anything foolish.”

Israel attacked dozens of suspected Iranian targets in Syria in overnight strikes this week that it said were in response to an Iranian rocket barrage. It was the most serious military confrontation between the two bitter enemies to date. The cross-border exchange gave way to a war of words.

U.N. Secretary-General Antonio Guterres called late Thursday for an immediate halt to “all hostile acts” to avoid “a new conflagration” in the Middle East.

Guterres’ comments came as a calm night followed intense attacks on parts of Syria by Israel. Israel has called on the U.N. Security Council and secretary-general to condemn Iran’s attack on its positions in the Golan Heights.

The Security Council, deeply divided over Syria, is highly unlikely to issue a statement. As of Friday morning no council member had asked for a meeting.

Speaking while touring the Israeli side of the Golan Heights, Defense Minister Avigdor Liberman said Israel is not looking for friction. “We did not come to the Iranian border; they came here,” he said.

Iran has advisers and experts in Syria, and has backed tens of thousands of militiamen who are fighting alongside Assad’s forces in the civil war. Israel has warned that it will not tolerate its archenemy Iran establishing a military presence on its doorstep.

“I will take this opportunity to send a message to Assad: Get rid of the Iranians, get rid of Qasem Soleimani and the Quds Force. They are not helping you, they only cause damage, and their presence will only cause problems,” Liberman said. Soleimani is the head of the Iranian Revolutionary Guard’s elite Quds expeditionary force, which is fighting in both Iraq and Syria.

“Get rid of the Iranians and maybe it will be possible to have a different kind of life,” Liberman added.

Israel and Iran have long fought each other through proxies, and with the new exchange each seemed to be sending a warning that a direct clash between them could swiftly escalate.

The scope of the attacks — which Israel called its largest in Syria since the 1973 Yom Kippur War — raised the specter of a full-fledged war between Iran and Israel in Syria, a conflict that could potentially drag the terror group Hezbollah and Lebanon into the mix with devastating effects, although both sides appeared to signal that they wanted the confrontation to remain contained, at least for now.

The rising tension in Syria came just as the United States decided to withdraw from the 2015 nuclear deal with Iran and impose new sanctions, adding to the pressure on Tehran.

Thousands of Iranians protested Friday across the country. Some protesters set a U.S. flag on fire in Tehran with the nuclear deal scribbled on it. Others stomped on a picture of U.S. President Donald Trump.

Although slogans of “Death to America” were few, many Iranians are angry over the U.S. decision to withdraw from the deal and are siding with hard-liners who long have warned to be suspicious of the West.

In Tehran, senior cleric Ayatollah Ahmad Khatami said the Western pressure will backfire, threatening that Israel will pay the price.

“The holy system of the Islamic Republic will step up its missile capabilities day by day so that Israel, this occupying regime, will become sleepless, and the nightmare will constantly haunt it that if it does anything foolish, we will raze Tel Aviv and Haifa to the ground,” the hard-line cleric said during Friday sermons. The worshipers chanted: “Death to America,” and “Death to Israel”.

Ghasemi, the foreign ministry spokesman, said the direct attacks on Syria come as the government of Assad is regaining control of territories from rebel fighters, accusing Israel and the United States of supporting the opposition, which he called “terrorists.”

In the latest victory for Assad, Syrian police prepared Friday to take control of three suburbs of the capital Damascus previously controlled by the rebels.

Opposition fighters and their families left Babila, Beit Sahem and Yalda, three southern suburbs that were held by rebels for years, Syrian state media and a war monitor said.

The Britain-based Syrian Observatory for Human Rights said the last group evacuated the suburbs Thursday night, bringing the total of those fighters and civilians who left the area since May 3 to 8,400.

Syria’s state news agency SANA said opposition fighters who decided to stay in the suburbs will hand over their weapons and return to normal life.

With the capture of the three suburbs, the only area outside government control in Damascus is that of the neighborhood of Hajar al-Aswad and the nearby Palestinian refugee camp of Yarmouk that are partially controlled by the Islamic State terror group.

Government forces have been on the offensive against IS in the area since last month, and its capture would boost security in Assad’s seat of power.