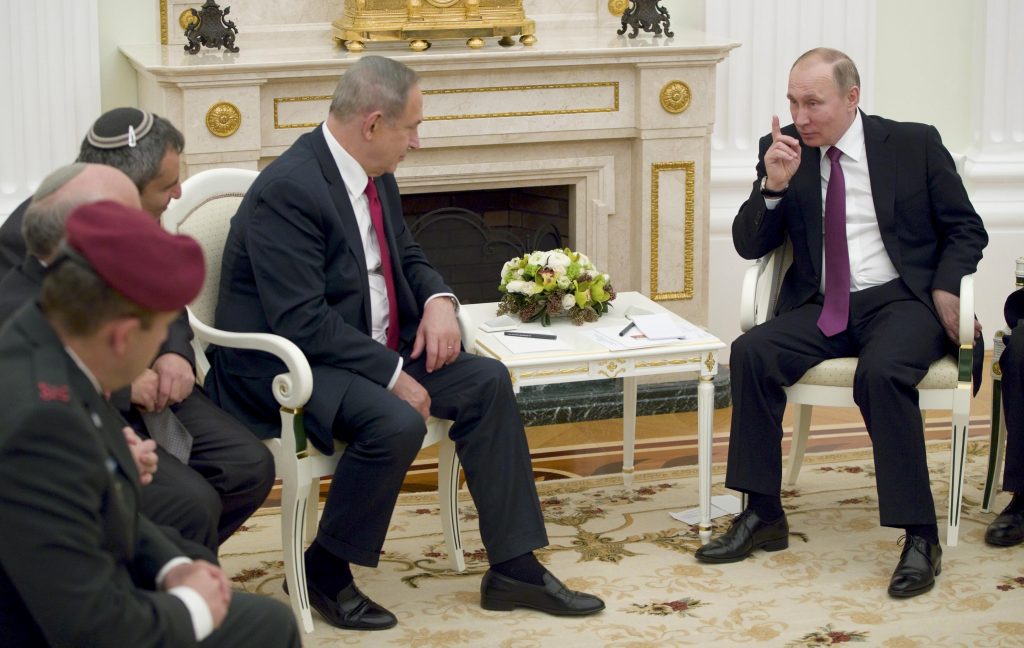 Israel has been lobbying world powers to “fix or nix” a 2015 nuclear deal with Iran as a May 12 deadline set by President Donald Trump approaches.

Israel is also concerned that Iran is establishing a military presence in Syria, and it has attacked Iranian targets there.

Since intervening in the Syrian civil war on behalf of President Bashar al-Assad in 2015, Russia has generally turned a blind eye to Israeli attacks on suspected arms transfers and deployments by his Iranian and Hezbollah allies.

But when Moscow condemned an April 9 strike that killed seven Iranian personnel, and blamed Israel, it set off speculation in Israel that Russian patience might be wearing thin.

On Thursday, Defense Minister Avigdor Liberman reminded Russia of his government’s decision not to join Western sanctions against it, and asked that Moscow reciprocate with a more pro-Israel approach to Syria and Iran.

Netanyahu and Putin spoke by phone on Monday after the prime minister presented what he said were Iran’s secret nuclear files which document it having worked toward developing atomic weapons in the past.

U.S. and Israeli officials said the information showed Iran had lied about its past work to develop nuclear arms but intelligence experts said there was no smoking gun showing that Tehran had violated the nuclear deal under which it curbed its atomic program in return for relief from economic sanctions.

Trump has given Britain, France and Germany a May 12 deadline to fix what he views as the deal’s flaws – its failure to address Iran’s ballistic missile program, the terms by which inspectors visit suspect Iranian sites, and “sunset” clauses under which some of its terms expire – or he will reimpose U.S. sanctions.

Moscow has repeatedly said it wants the Iran nuclear deal left intact. Foreign Ministry spokeswoman Maria Zakharova said on Friday Russia would deem any changes to the deal to be unacceptable.