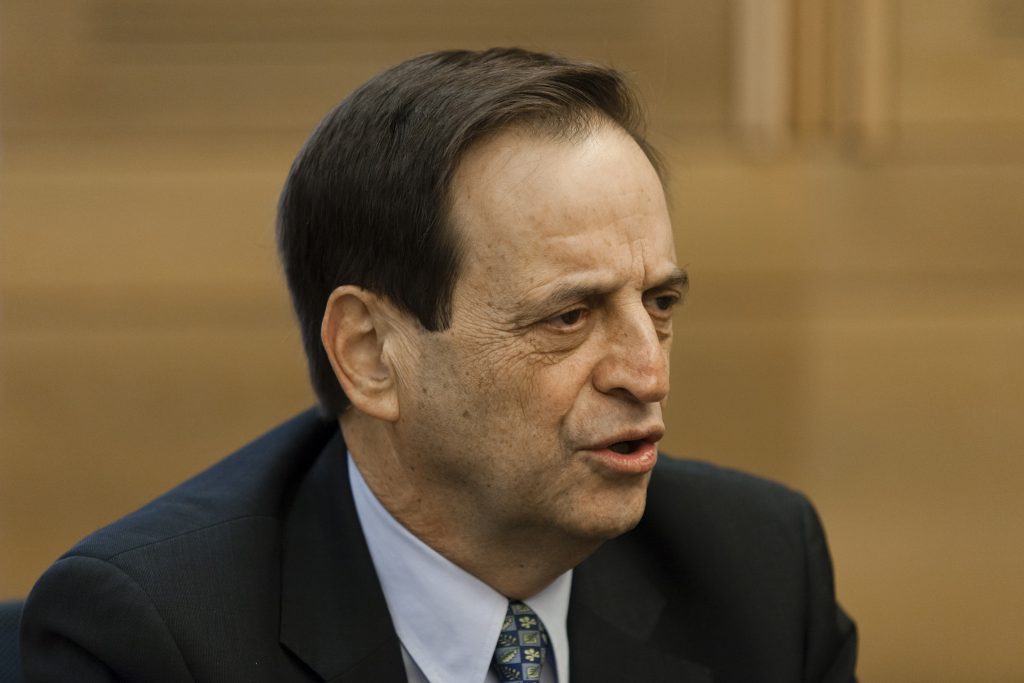 Meridor spoke at the college, a constituent school of the University of London, on Monday evening. The event was co-hosted by the Pinsker Centre, a student-led organization that aims to educate about the Middle East, and the King’s College and City University Israel Societies.

As has become common when prominent Israeli speakers attend campus events, there was a large crowd of student activists outside, chanting pro-Palestinian slogans, and attempting to disrupt the talk and embarrass or frighten those attending. The shouting – including slogans like, “Free free Palestine,” “Shame,” and “War criminal” – continued throughout Meridor’s speech, making it difficult to hear at times.

The Union of Jewish Students (UJS) condemned the demonstrators, describing the protest as a “shameful scene.” A spokesperson for UJS said, “Debate and discussion are vital aspects of university life, as is the right to protest. However, intimidating those who try to hear a variety of views with chants of ‘shame’ is not conducive to informed and respectful dialogue, which should be at the front and center of university life.

“We are now in contact with students and campus security at King’s College London, seeking constructive actions regarding both this event and the future.”

Jonathan Arkush, president of the Board of Deputies of British Jews, the U.K.’s democratically elected representative body, said, “While the Board of Deputies supports the right to demonstrate peacefully, we were appalled at the scenes last night at King’s College London, where those attending a talk by Dan Meridor were barracked and intimidated in a completely unacceptable way. Clearly, there are deficiencies in King’s College’s event management which allowed these scenes to take place. We will be contacting the Principal to discuss last night’s events and to gain assurances that there will be no repeat.”

There were initially reports that the police had been called to the event to enable some of the attendees to leave without being intimidated. However, King’s College has denied that the police attended and that any protestors were escorted from the campus.

A spokesperson for the university said, “If our review process highlights any potential risks, we put additional conditions in place before permitting the event to proceed.

“These conditions include recording the speeches to ensure that the events take place within the law, an independent event chair, additional security in place and having senior representatives of the university and the Students’ Union in attendance.

“Universities have a unique challenge to create environments in which open and uncensored debate from all sides on issues of political, scientific, moral, ethical and religious significance can take place without fear of intimidation and within the framework of the law.

“We are proud of our diverse community and are absolutely committed to academic freedom and free, peaceful and respectful dialogue where people have conflicting views.”

Freedom of speech on campus is a hot topic in the U.K. at the moment, following a controversial speech from Jo Johnson, the higher education minister, in which he said that universities could be fined for “no platforming” speakers whose opinions the students did not like. A recent video showed Conservative MP Jacob Rees-Mogg confronting anti-fascist demonstrators at the University of West of England in Bristol. Mr. Rees-Mogg attempted to reason with the protestors, who disrupted his speech, and then apparently interposed himself between them and some other students to prevent a physical confrontation. His actions drew praise from across the political spectrum, as MPs increasingly find themselves experiencing personal abuse and threats of physical violence, in a debasement of British politics.