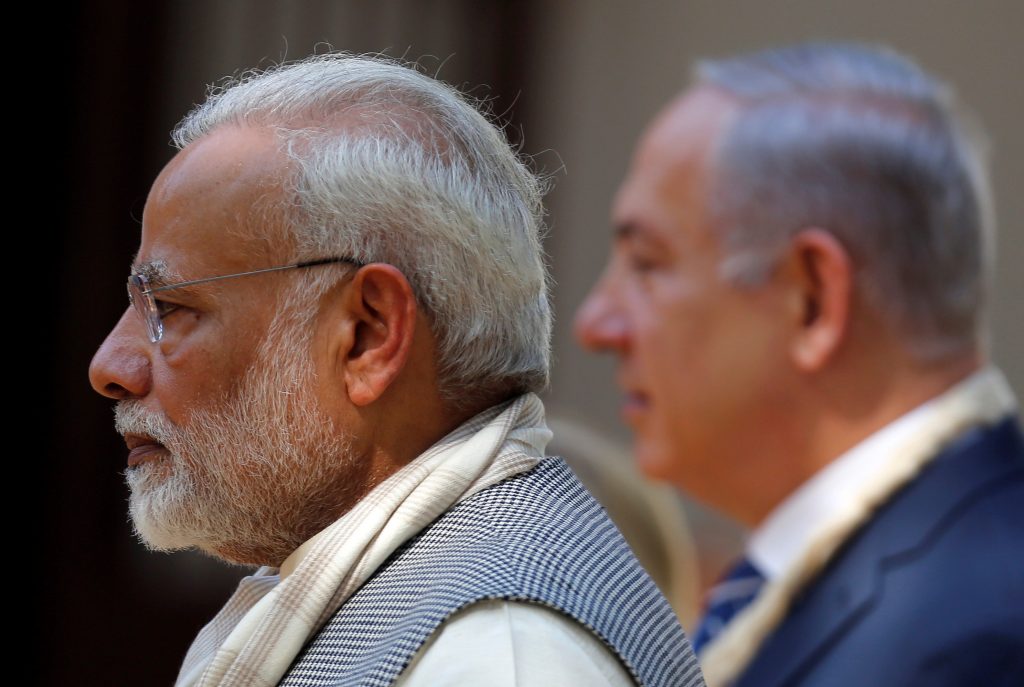 Prime Minister Binyamin Netanyahu continued his so-far successful trip to India Wednesday, inaugurating several joint Israel-India projects in Ahmedabad, the largest city in the western Indian state of Gujarat. Netanyahu was met there by Indian Prime Minister Narendra Modi, a native of Gujarat. There, the two will inaugurate a research center and a water installation, both jointly developed by the two countries.

The two arrived in Ahmedabad Wednesday afternoon local time. The Indian Express quoted members of the local Jewish community as saying that they were “disappointed” that the two leaders did not stop to greet them. “We have been here since morning. Many have taken a holiday in the office. We have bouquets and were hoping we could at least see both the leaders briefly. But they just flew past. We did not even know when they went,” the newspaper quoted local Jewish resident Margalita Abraham as saying. There are about 140 Jews in the city, the report said.

Meanwhile, Netanyahu had some comments for the Israeli reporters accompanying him on the visit. The American embassy will be moved from Tel Aviv to Yerushalayim “much more quickly than you think, certainly within the next year,” the prime minister said. Although President Donald Trump has acknowledged Yerushalayim as Israel’s capital, he said in an announcement recognizing that fact that the actual process of moving the embassy could take some time, as the U.S. wanted to construct a new building to house it. Analysts have taken that statement to mean that the actual moving of the embassy could take years.

Netanyahu also commented on the change in attitude of the U.S. to Iran and the 2015 nuclear deal that lifted some sanctions off that country. “There is a dramatic change regarding Iran,” Netanyahu said. “The president has laid a timeline in which he expects the requisite changes to be made in the Iran deal. It’s clear that he plans to follow through on this, and this has great strategic importance for us. Changing or canceling the agreement is important for us, because otherwise the Iran nuclear train will set off, and we know where it will end up,” he said.