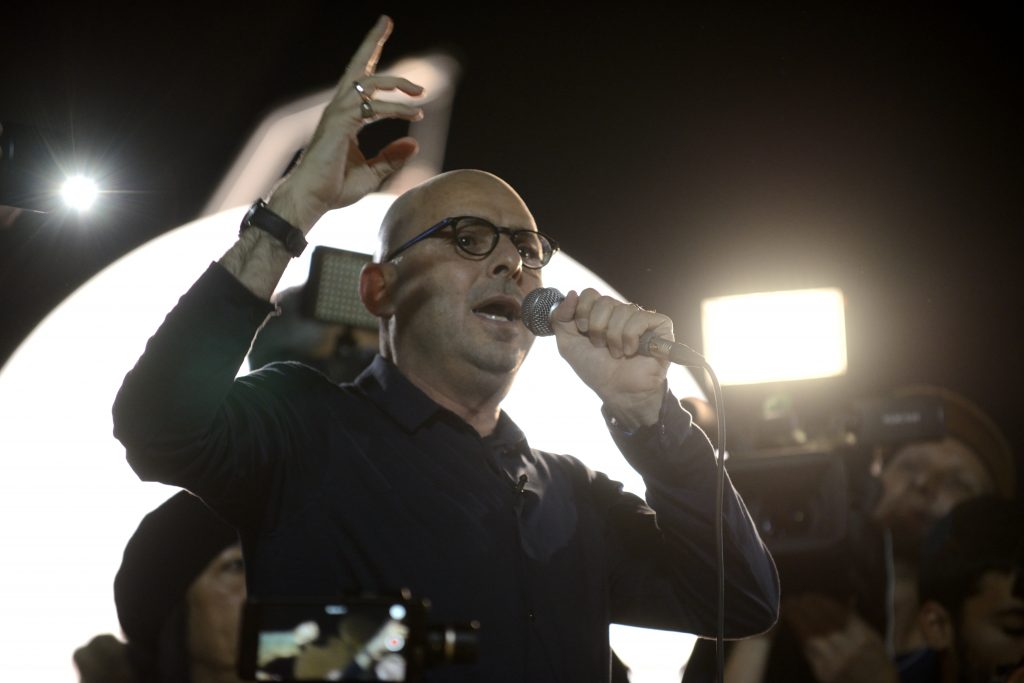 For the fourth week in a row, thousands of people protested against government corruption in Tel Aviv – and for the first time, a similar protest was held in Yerushalayim. The Tel Aviv protest featured speeches against the government by members of Zionist Camp, including party chairman Avi Gabay, while the Yerushalayim protest featured former Defense Minister Moshe Yaalon, as well as several MKs from Kulanu, a member party of Prime Minister Binyamin Netanyahu’s coalition.

The protests took on added meaning this week, as expectations grew in the political establishment that police would recommend that prosecutors indict Netanyahu on corruption charges. The indictment would most likely be based on the investigation of Case 1000, in which Netanyahu was accused of accepting extravagant gifts from millionaire Arnon Milchin, mostly cigars. According to Likud sources, police have not established any quid pro quo in the case, in that Milchin did not receive any consideration or benefit for the alleged gifts.

Commenting on the case, coalition chairman MK David Amsalem backtracked on comments he had made earlier implying that Netanyahu should resign if he was indicted on corruption charges. “I am sorry to disappoint the left, but my stance is that the recommendations of police have no legal standing. As far as I am concerned, bribery means getting money in envelopes, not cigars from a personal friend. There are no indictments involving money in this case.”

The Yerushalayim protest was organized by Yoaz Hendel, a journalist generally identified with the right. “There needs to be a place for the right to speak out against government corruption,” Hendel gave as the reason for the protest, as the Tel Aviv protest was generally identified with the left. Several hundred people attended the protest. MK Ro’i Falkman (Kulanu) told Hadashot News said that he was speaking at the protest as an individual decision, and that the party had not discussed the matter. “This is not a protest against the government, this is a protest for better government. We can have a rightwing government without corruption,” he said.

In a statement, the Likud said that the right “was not buying the ‘bluff’ of a rightwing protests. Everyone realizes that the protest in Zion Square is a satellite protest of the one in Tel Aviv. Rightwing voters are not impressed by the small group of naïve and special interest activists who are cooperating with the left, and they will not repeat the mistake of causing a rightwing government to fall, paving the way for another Oslo tragedy.”

The statement referred to the events of 1992, in which rightwing parties abandoned Prime Minister Yitzchak Shamir’s coalition – also over accusations of corruption in the government – paving the way for the rise of Yitzchak Rabin as Prime Minister, and the signing of the Oslo Accords. The events of 1992 were much on the minds of leaders of the religious Zionist community, who in recent days have solidly backed Netanyahu in the wake of the expected police recommendations, even if he has not fulfilled the agenda of accelerated building in Yehudah and Shomron that he had promised several times. The religious Zionist community said that they are “firmly against the protests whose purpose is to cause the government to fall. We all remember the dangerous events of 1992 that brought about the Oslo Accords, and the subsequent deaths of over 1,000 Israelis. This is not the time for dangerous activities that will cause the government to fall, bringing great danger to the world of Torah and to the Land of Israel.”