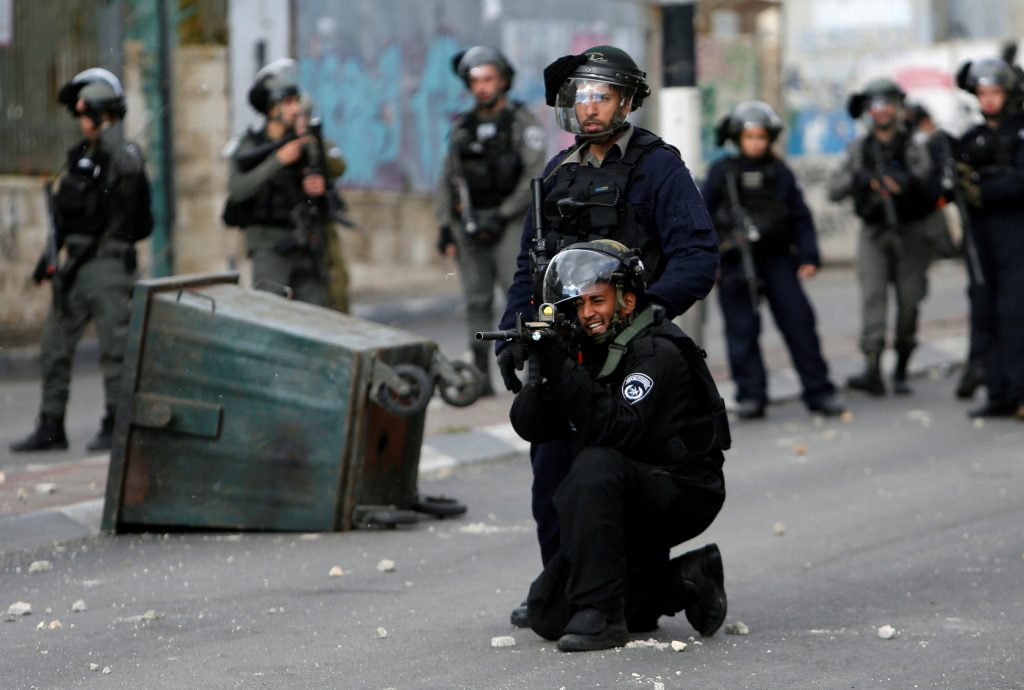 At least 10 terrorists were injured Thursday as Arabs in Gaza, Yehudah, Shomron and Yerushalayim rioted in the wake of the decision by U.S. President Donald Trump to recognize Yerushalayim as Israel’s capital. Gaza Arabs tried to breach the border fence, throwing rocks and firebombs at Israeli forces. Thousands were rioting in Jenin, and security forces faced off against rioters in Chevron and Beit Lechem as well. In Ramallah, the seat of the Palestinian government, protesters set tires on fire, sending a thick plume of black smoke over the city.

Hundreds were also demonstrating at Shaar Shechem in Yerushalayim, and further, larger demonstrations were expected later in the day. That demonstration was proceeding more or less peacefully, police said. Arabs called for a civil uprising against Israel, and demanded that Israeli Arab MKs take the lead in demanding that Yerushalayim be the capital of a Palestinian state.

“We are tired of their slogans,” one demonstrator told Yediot Acharonot. “Let them come here and stand up for our rights. Let them not be worried about their seats, otherwise they will lose the Arab street.”

Security forces were preparing already in the early morning hours of Thursday for an increase in tension. Extra troops have been deployed to key roads in Yehudah and Shomron. So far, there is no plan to call up extra reserves, but security officials will review the events of the day and decide how to deploy on Friday, when Muslims gather in mosques and are likely to hear angry sermons about the announcement, security officials told Channel 10.

A major demonstration protesting the decision was set to take place Thursday afternoon in Ramallah. IDF sources told Israel Radio that they were prepared to deal with the situation, and that they had increased forces throughout Yehudah and Shomron. Businesses and schools in PA cities were striking Thursday, with merchants telling Yediot Acharonot that they were prepared to “follow any decision by the leaders of the struggle, even if we have to keep our stores closed for an extended period.”

There were no serious casualties reported in Thursday’s clashes. But Friday could provide an important test when Palestinians gather for weekly prayers.

Hamas top terrorist Ismail Haniyeh earlier Thursday called for a “new intifada. This decision is a declaration of war on the Palestinians. We call on all and will do everything we can to foster a new intifada, and we call on the entire Palestinian nation to join us.” The U.S. decision also put into question whether there was any point to the reconciliation deal with Fatah, if the point of that was to create a united front for negotiations with Israel, Haniyeh said. “This announcement is proof that the Oslo process is dead. We must complete the reconciliation agreement, and establish a joint front to battle Israel and the United States.”

In a separate announcement, Islamic Jihad said that the decision by Trump to recognize Yerushalayim as Israel’s capital and order the eventual move of the U.S. Embassy there from Tel Aviv was a “punch in the face to all those seeking a peace agreement. Arab countries who truly want to help the Palestinians should remove their ambassadors from the United States.”