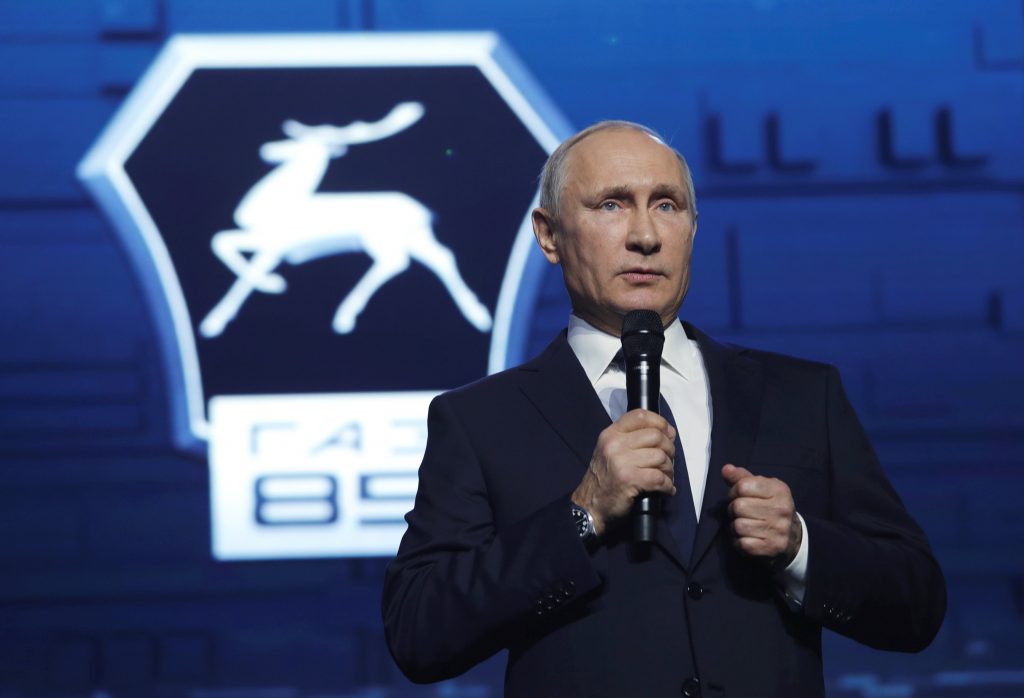 Russian President Vladimir Putin declared his intention Wednesday to seek re-election next year, a vote he appears certain to win and that would set him up to become the nation’s longest-serving ruler since Soviet dictator Josef Stalin.

Putin chose to make the long-expected announcement at the GAZ automobile factory in Nizhny Novgorod, where he found an enthusiastic audience in the plant’s blue-collar workers.

“I couldn’t find a better place and moment for that,” he said to massive applause. “Thank you for your support. I will run for president.”

Putin has been in power in Russia since 2000. He served two presidential terms in 2000-2008, then shifted into the prime minister’s seat because of term limits, but continued calling the shots while his ally, Dmitry Medvedev, served as placeholder president.

Medvedev had the presidential term extended to six years and then stepped down to let Putin reclaim the presidency in 2012. If Putin serves another six-year term that would run through 2024, he would reach the milestone for longest tenure as leader since Stalin.

While few doubted that Putin would run in the March 18 election, a delay in announcing his bid was seen as part of the Kremlin’s political maneuvering.

“It was necessary to ensure electoral mobilization,” Dmitry Orlov, a political consultant close to the Kremlin, said in televised remarks.

The Kremlin has been worried about growing voter apathy, and the uncertainty about Putin’s plans seemed intended to encourage public interest in the race.

Putin’s approval ratings top 80 percent, making him certain to win an easy first-round victory. Blue-collar workers and state employees form the core of his support base.

“Thank you for your work, for your attitude to your jobs, your factory, your city and your country!” Putin told factory workers. “I’m sure that together we will succeed.”

The GAZ factory is one of the country’s most emblematic industrial giants. It was built during the Soviet industrialization drive in 1932 and has churned out millions of vehicles, from vans and military trucks to Volga sedans and luxury cars for the Soviet elite.

For months, Putin fended off questions about his plans, fueling speculation about possible motives behind the delay in declaring his candidacy. Some thought Putin would step down and name a preferred successor.

Earlier Wednesday, Putin was asked about his intentions at a meeting with young volunteers in Moscow. He said he would decide shortly if he would seek another six-year term.

A stream of fawning comments from officials and lawmakers quickly followed his announcement.

“The decision gives us the feeling of certainty about tomorrow,” said Vyacheslav Volodin, the speaker of the lower house of parliament. “The decision was expected … but we were already getting worried.”

Valentina Matviyenko, the speaker of the upper house of the Russian parliament, said Putin’s announcement helped end “anxiety and tensions in the society.”

The upper house is expected to give the formal start to the election campaign later this month.

Veterans of past campaigns — Communist chief Gennady Zyuganov, ultranationalist Vladimir Zhirinovsky and liberal leader Grigory Yavlinsky — all have declared their intention to run. They will likely be joined by Ksenia Sobchak, who is the daughter of late former St. Petersburg Mayor Anatoly Sobchak, who was Putin’s boss in the 1990s.

The most visible Putin foe, Alexei Navalny, also wants to run, even though a conviction he calls politically motivated bars him from joining the campaign. He has organized a grassroots campaign and staged rallies across Russia to raise pressure on the Kremlin to let him register for the race.