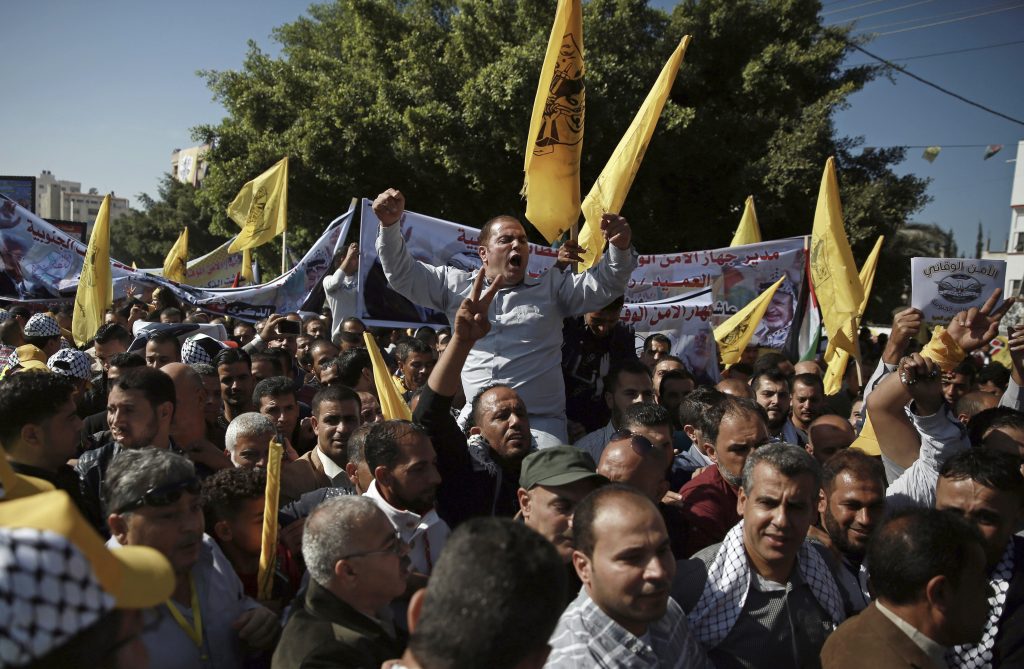 Tens of thousands of Gaza Palestinians marked the 13th anniversary of the Palestinian President Yasser Arafat’s death on Saturday for the first time since the Islamic Hamas group seized the territory a decade ago.

In the wake of a brewing reconciliation between Hamas and the Fatah party Arafat founded, Fatah supporters flocked to al-Saraya Square in Gaza City from all over the coastal enclave to commemorate the event, waving their yellow flag, raising posters of Arafat and donning his trademark kaffiyeh headgear.

Arafat died in 2004 at a hospital in France after two years of an Israeli siege on his West Bank headquarters.

After winning legislative elections in 2006, Hamas forces violently overthrew Fatah in Gaza the following year. The commemoration comes amid improving relationships between Fatah and Hamas, a month after the two rivals signed a deal in Egypt paving the way to end the Palestinian internal divide.

Under the deal, Hamas would cede control of Gaza to the Fatah-led Palestinian Authority after a decade of unilateral rule by the Islamic movement.

“The accurate implementation of the deal and the full empowering of the government will surely lead to easing the suffering and reviving hope of a better future for all of us,” President Mahmoud Abbas, Arafat’s successor, told the crowd in a prerecorded speech from his West Bank headquarters.

Earlier this month, Hamas transferred control at Gaza’s crossing points with Israel and Egypt to the Fatah-led Palestinians Authority, implementing the first part of the Egyptian-brokered reconciliation. Talks will continue in Cairo in ten days to discuss broader issues.

A sticking point has been the vast arsenal of rockets, attack tunnels and explosives that Hamas and smaller groups in Gaza possess. In his speech, Abbas reiterated his firm stance that he wants “one authority, one law and one legitimate weapon” in Gaza. Hamas vows not to disarm.

In November 2007, months after Hamas took over Gaza following a week of bloody fighting, Fatah organized a rally to mark Arafat’s death, but it ended with clashes between Fatah supporters and armed Hamas forces, in which seven civilians were killed.

Not all participants belonged to Fatah. Some of them came because they missed the sort of unity that prevailed during Arafat’s reign. “Arafat is for all the Palestinians,” said Ashraf Hamouda, 34.