The whole Gateshead kehillah together with thousands of talmidos around the world were greatly saddened and in deep mourning following the petirah on Monday morning of Rebbetzin Yehudis (Judy) Jaffe, a”h. She was an outstanding personality in her own right and commanded the respect and affection of innumerable people.

Rebbetzin Jaffe was born in 1946 in Gateshead. Her parents were the unforgettable Mr and Mrs Avrohom Dov Kohn, zt”l, who founded the Gateshead Teachers’ Training Seminary who imbued her with a passion for her life-long mission. Following her marriage to Harav Ezriel Jaffe, the young couple returned to Gateshead. Her husband first learned in Gateshead Kollel and later established Yeshivas Tiferes Yaakov and Yeshivas Ohr Hatalmud. Her primary concern was to build a true bayis ne’eman and to be mechanech the next generations of Klal Yisrael. She supported the work of her husband, to allow him to learn and be marbitz Torah undisturbed. Even during her final illness she did not want to burden him with her suffering.

Rebbetzin Jaffe had a natural, innate talent to teach and her teaching career spanned 50 years. She left a deep imprint of ahavas haTorah and yiras Shamayim on her thousands of talmidos.

The levayah took place on Monday afternoon, leaving from her home in Cambridge Terrace. The mara d’Asra Harav Shraga Feivel Zimmerman, shlita, was maspid outside Yeshivas Tiferes Yaakov, followed by Harav Jaffe. Rav Gavriel Aryeh, her son, and Harav Yehoshua Jochnowitz, her son-in-law, were maspid outside Yeshivas Ohr Hatalmud, before the levayah proceeded to Bewick Road where the seminary girls lined one side of Bewick Road to bid a tearful farewell to their beloved mentor. The maspidim were Harav Zimmerman, Rav Nechemiah Jaffe, her son and Rav Simcha Kohn, brother of the nifteres.

The levayah travelled to London, where Dayan Yonoson Abraham and her sons Rav Simcha and Rav Nosson Jaffe were maspid in Golders Green. The levayah then departed to Eretz Yisrael. A huge crowd was present for the final stages of the levayah, which took place on Tuesday morning from Yeshivas Geon Yaakov in Bnei Brak to the Ponevezh beis hachaim. The maspidim were led by Harav Zev Berlin, son-in-law of Harav A.L. Steinman shlita, followed by Harav Eliyohu Mann, close talmid of Harav Chaim Kanievsky shlita, Harav Avrohom Kesler, brother-in-law of the nifteres, Harav Chizkiyohu Mashkovsky, Mashgiach Yeshivas Ponevezh, and finally a son, Rav Yaakov Jaffe. 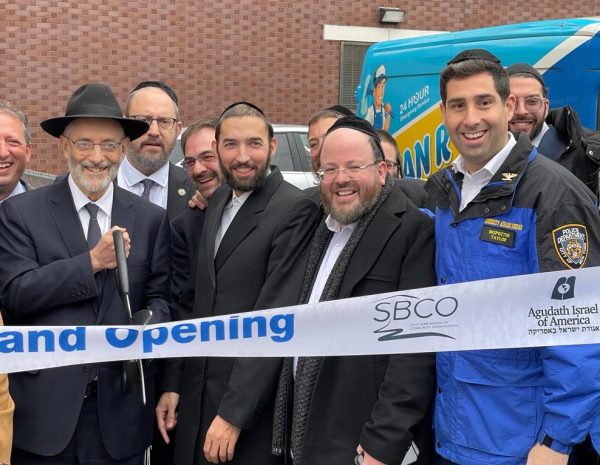