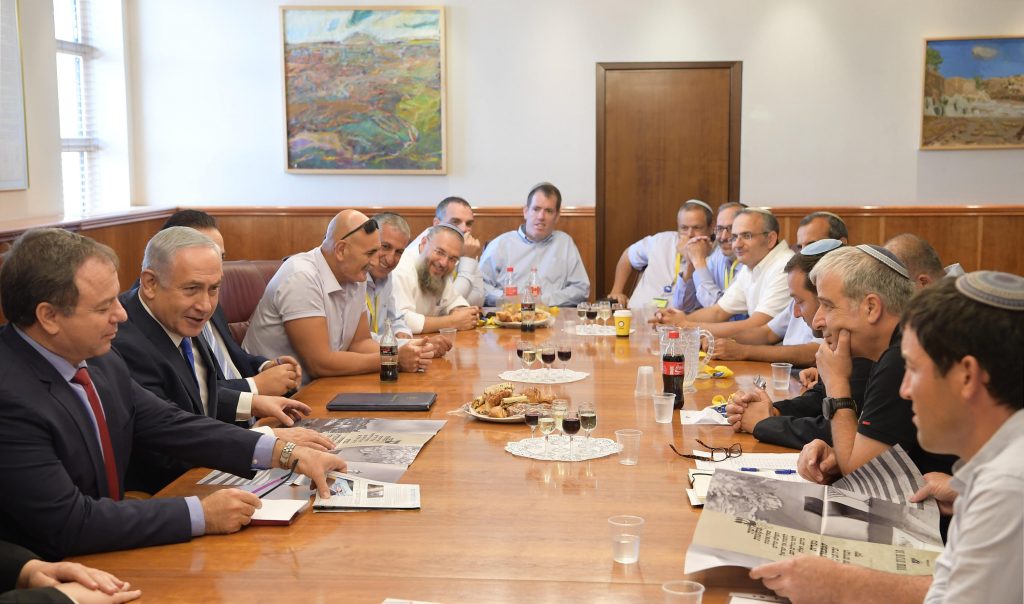 Israeli Prime Minister Binyamin Netanyahu attempted to explain to leaders from Yehudah and Shomron, who are pressing for massive building starts, that he is working under certain constraints imposed by Washington.

Netanyahu quoted a U.S. official telling his chief of staff that “it’s okay to grab, but don’t be greedy,” an official from the Yesha Council told The Times of Israel after the meeting on Wednesday.

During the closed-door meeting, Netanyahu said he convinced the Trump administration to drop its distinction between blocs and isolated communities, giving Israel leeway to negotiate for keeping them in any future peace agreement.

Netanyahu also noted that the U.S has refrained from criticizing Israel over construction in Yehudah and Shomron, in recognition of Israel’s willingness to act with restraint.

The meeting transpired on the day of a celebration marking 50 years of the Jewish return to Yehudah and Shomron, and regional leaders were in no mood for such restraint.

Instead, they urged a building program of 10,000 new housing units in Yehudah and Shomron, according to Ynet.

Members of the Yesha Council charged that they were being discriminated against, and that the unofficial freeze must be lifted.

“While in small Israel, both in the urban centers and in the periphery, huge investments are being made; in Yehudah and Shomron there is neglect that has been going on for years of everything related to the development of transportation, water, electricity and gas infrastructure,” they told him.

Netanyahu would only promise to reschedule a meeting of the Civil Administration Higher Planning Committee for October 16, when 3,330 new units would be approved, according to a Yesha official, and he did not commit to infrastructure renovations.

Responding to a demand for immediate action, the prime minister told the group, “Not everything is possible. What doesn’t happen now will happen in another three months.”

According to the version of events put out by the Prime Minister’s Office, the regional leaders “thanked Prime Minister Netanyahu and praised him for his action on behalf of settlement in Yehudah and Shomron.”