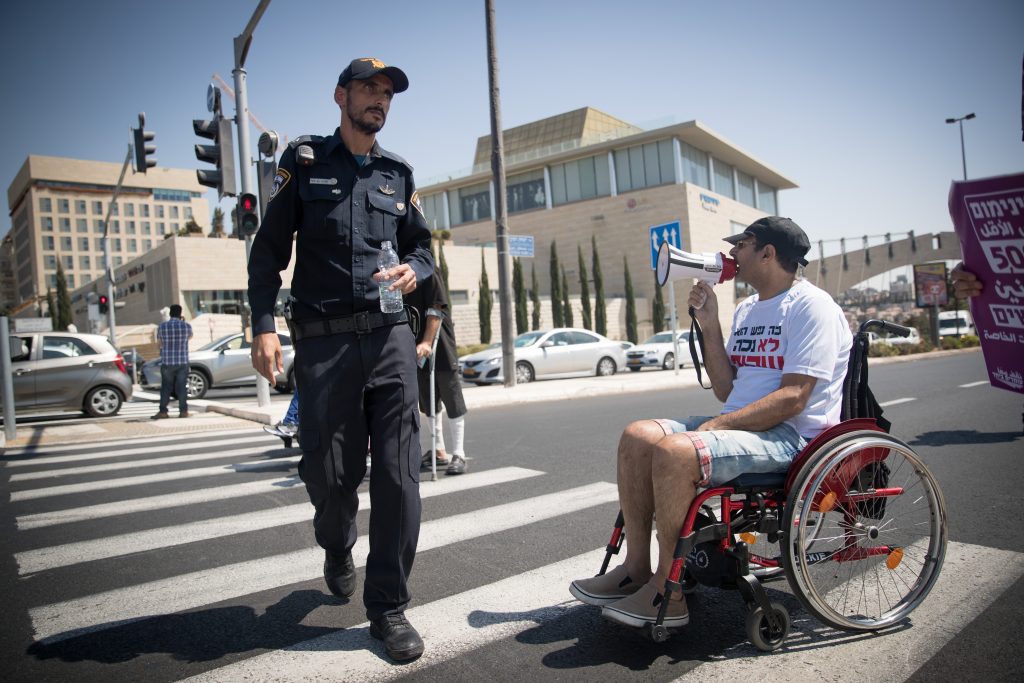 The protest movement for expanded benefits for disabled Israelis, which took to the streets and blocked traffic at major intersections through recent months to get its message across, took its case to the Knesset plenum on Monday, interrupting the parliamentary summer vacation.

Representatives for the disabled are lobbying the government for a raise in monthly stipends from 2,342 shekels ($660) to 5,000, which would make it equivalent to the current minimum wage.

A government-appointed panel has recommended an increase to 3,200 shekels ($900), which would be limited to those with very severe disabilities and no family.

Speaking on behalf of Prime Minister Netanyahu, who was in New York on Monday, Health Minister Rabbi Yaakov Litzman assured the plenum that the government would advance legislation after the chagim to raise the stipends to 3,200 ($900) for those unable to work, and 4,000 ($1,130) for those who qualify as serious cases. That would mean a 4-billion-shekel rise ($1.1 billion) in government spending for the disabled over four years, and would include other benefits, as well, he said.

The government’s promise was not warmly received.

Meretz MK Gilon, himself disabled, accused the prime minister of being the only person in the Knesset who opposes the minimum-wage guarantee.

“The government of Israel is making a joke out of 119 Knesset members,” he said.

“The time has come for us to gather here to listen and make heard the cry of the disabled,” said Joint (Arab) List MK Dov Khenin. “The obvious must be stated: A disabled person is not half a human being. When we reached the conclusion that a person can support himself with dignity with NIS 5,000 — this is the minimum — we must ensure the exact same thing for the disabled.”

Support for the disabled bridged partisan differences, as some coalition members joined the opposition.

“I pledge not to rest; if it doesn’t go forward, nothing else will,” said United Torah Judaism MK Rabbi Moshe Gafni, chairman of the Knesset Finance Committee, which has the power to block appropriations.

Meanwhile, the campaign for the disabled did not abandon the streets as a venue for their protests. Activists reportedly disrupted traffic along the Tel Aviv–Yerushalayim highway ahead of the Knesset session.

Protesters also blocked a street near the Knesset in the capital.