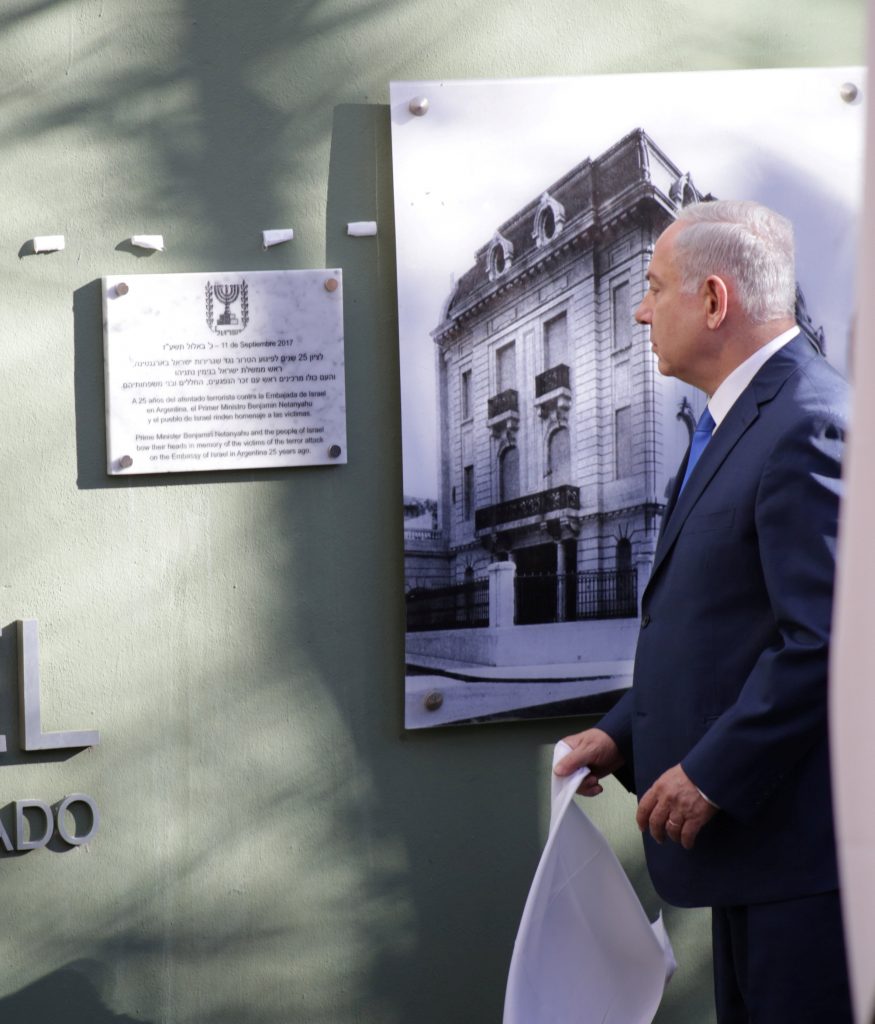 Israeli Prime Minister Binyamin Netanyahu, who was in Argentina on Tuesday, praised President Mauricio Macri’s effort to resolve the bombing of a Jewish center in Buenos Aires in 1994 that killed 85 people.

The bombing, which has yet to be solved, has been blamed by the Argentine courts on Iran.

Under previous President Cristina Fernandez, the prosecutor in the bombing case was found shot dead just hours before he was to appear in Congress to outline his accusation that Fernandez had tried clear the way for a ‘grains for oil’ deal with Iran by white-washing Iran’s role in the attack.

Argentine prosecutors blame Iranians for organizing the truck bombing of the AMIA Jewish community center. But no one has been brought to trial in either that case or the 1992 bombing of the Israeli embassy in Buenos Aires.

“Then and now, Iran is instigating terror across the world, and it was Iran that lit the fuse twice in Argentina. Iran initiated, planned and carried out the terrible terrorist attacks through its proxy, Hezbollah,” Netanyahu said in a statement.

The mystery around the bombing of the AMIA center thickened in 2015 when the prosecutor investigating the case, Alberto Nisman, was found on the floor of his Buenos Aires apartment with a pistol by his side and a bullet in his head. The death was classified as a suicide, but Nisman’s family and friends dismissed that idea as absurd.

Polls show most Argentines believe his death was a homicide.

Macri won the presidency and succeeded Fernandez in late 2015. He has since boosted ties with the United States and Israel while trying to attract the foreign investment he says is needed to stimulate an economy damaged by the inflationary policies and heavy currency controls of the Fernandez years.

Macri has met with Nisman’s family and says he has placed a high priority on solving both Nisman’s death and AMIA bombing.

Netanyahu is traveling with about 30 Israeli corporate representatives looking to increase trade with Latin America. The companies include water system and agricultural technology firms that could be useful to Argentina’s key grains industry.

After Argentina, Netanyahu will visit Colombia and Mexico before addressing the United Nations General Assembly on Sept. 19.