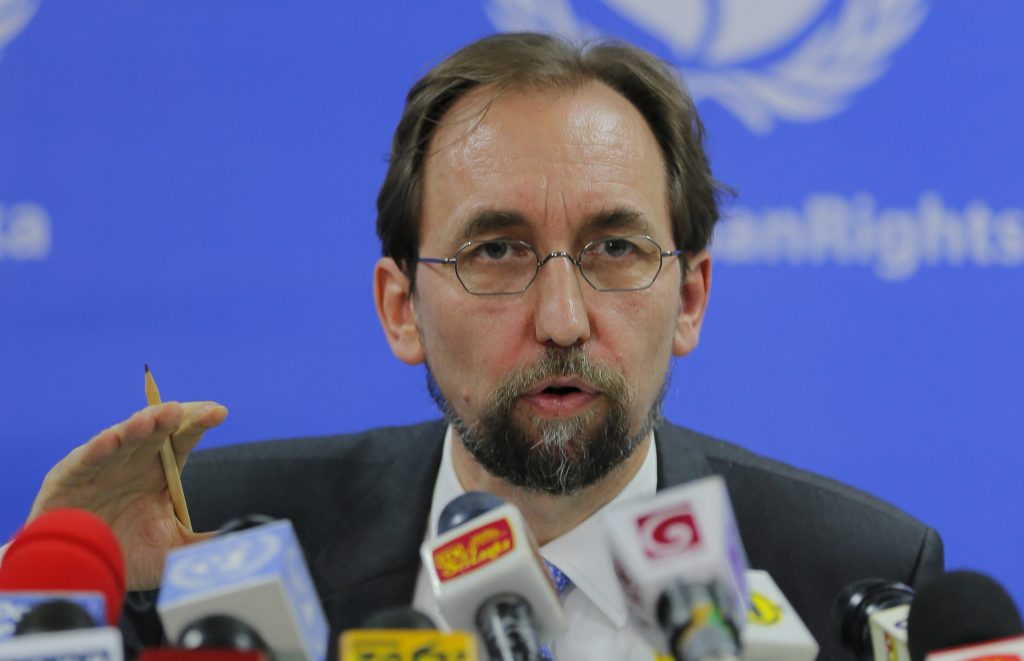 The Trump administration is urging the United Nations not to publish what it calls a “blacklist” of international firms that do business in Israeli settlements on land claimed by the Palestinians for a future state, diplomats and others said.

The U.N. Commission on Human Rights voted to approve the database of companies last year, over objections from the United States and Israel, which describe the list as a prelude to anti-Israel boycotts.

American companies on the list drawn up by the Geneva-based commission include Caterpillar, TripAdvisor, Priceline, Airbnb and others, according to people familiar with it. It is not clear whether the list has been finalized.

Zeid Ra’ad Al Hussein, the U.N. high commissioner for human rights, has told U.S. officials he plans to publish the list by the end of the year and has asked for comments by Sept. 1 from countries where affected firms are headquartered, diplomats said.

U.S. officials would not comment on which firms were included on a version of the list recently transmitted to U.S. diplomats. Details of U.S. involvement and the inclusion of specific American firms has not previously been reported.

Zeid, a Jordanian diplomat who was his country’s ambassador to the United States, had agreed to one postponement this year, partly in response to a U.S. request. He has indicated he plans to move ahead now, arguing that the list is a resource for consumers and travelers, according to diplomats from several affected countries who requested anonymity to describe behind-the-scenes jockeying over the issue.

“The United States has been adamantly opposed to this resolution from the start” and has fought against it before several U.N. bodies, State Department spokeswoman Heather Nauert said. “These types of resolutions are counterproductive and do nothing to advance Israeli-Palestinian issues.”

“We have made clear our opposition regarding the creation of a database of businesses operating in Israeli settlements in the occupied territories, and we have not participated and will not participate in its creation or contribute to its content,” she said.

In ordering that a list be created, the commission invoked the 50-year Israeli occupation of Yehudah and Shomron and Eastern Yerushalayim and the “implications of the Israeli settlements on the civil, political, economic, social and cultural rights of the Palestinian people.”

It tasked Zeid’s office with producing “a database of all business enterprises involved” in settlement activity. The list is to be updated annually.

In June, Zeid told the commission that the Israeli occupation that began in 1967 violates international law and “has denied the Palestinians many of their most fundamental freedoms, and has often been brutal.”

Israeli Prime Minister Benjamin Netanyahu has said the list would help the Palestinian “boycott, divestment and sanctions,” or BDS, campaign, which he says unfairly singles out Israel for economic punishment.

U.S. diplomats have argued that the Commission on Human Rights went beyond its mandate in ordering the list.

The commission has no power to levy sanctions or otherwise punish companies, but opponents of the list say it could put pressure on the U.N. Security Council to follow up.

The idea behind the list arose from efforts to target international businesses that did business with apartheid-era South Africa, and from Arab-led efforts to boycott Israel decades ago.

It is not clear how individual U.S. companies are being placed on the list. Affected firms appeared unaware of the list when contacted, or did not respond to a request for comment.

In the case of travel-related firms such as TripAdvisor, it is also unclear whether their inclusion is the result of corporate activity inside settlements, such as advertising, or from inclusion of travel data about settlements on their websites.

“TripAdvisor can’t comment on a report it hasn’t seen,” said company spokesman Brian Hoyt. “We have not been contacted by the U.N. We continue to believe in the power of travel to bring cultures together around the world and are happy to discuss our position with the U.N. at any time.”

Nikki Haley, the U.S. ambassador to the United Nations, called the database “shameful” in remarks delivered in Geneva in June. She also said the United States is considering whether to remain a member of the commission, which she said was biased against Israel and too forgiving of autocrats and dictators.

“Blacklisting companies without even looking at their employment practices or their contributions to local empowerment, but rather based entirely on their location in areas of conflict, is contrary to the laws of international trade and to any reasonable definition of human rights,” Haley said. “It is an attempt to provide an international stamp of approval to the anti-Semitic BDS movement. It must be rejected.”

A senior U.S. official involved in the diplomacy said Washington has argued that the list need not be made public and that the commission’s resolution does not compel Zeid to follow up with spot checks or other actions after the list is complete.

The United States has argued that the criteria for including individual companies on the list is vague and arbitrary and that the definition of settlement activity can be unfairly stretched to include broad categories of commercial activity in the occupied territories.

“We are looking for the high commissioner’s office to implement this in the most narrow way possible, if he has made a decision to implement it at all,” said the senior U.S. official, speaking on the condition of anonymity to discuss internal deliberations.

Anne Herzberg, a lawyer and activist against BDS activities with the Yerushalayim-based group NGO Monitor, said the list is “punitive.”

“It’s a process that is really extraordinary,” Herzberg said. “There is no due process, they are not contacting companies ahead of time, and they have no basis to evaluate what they are sent about companies.”