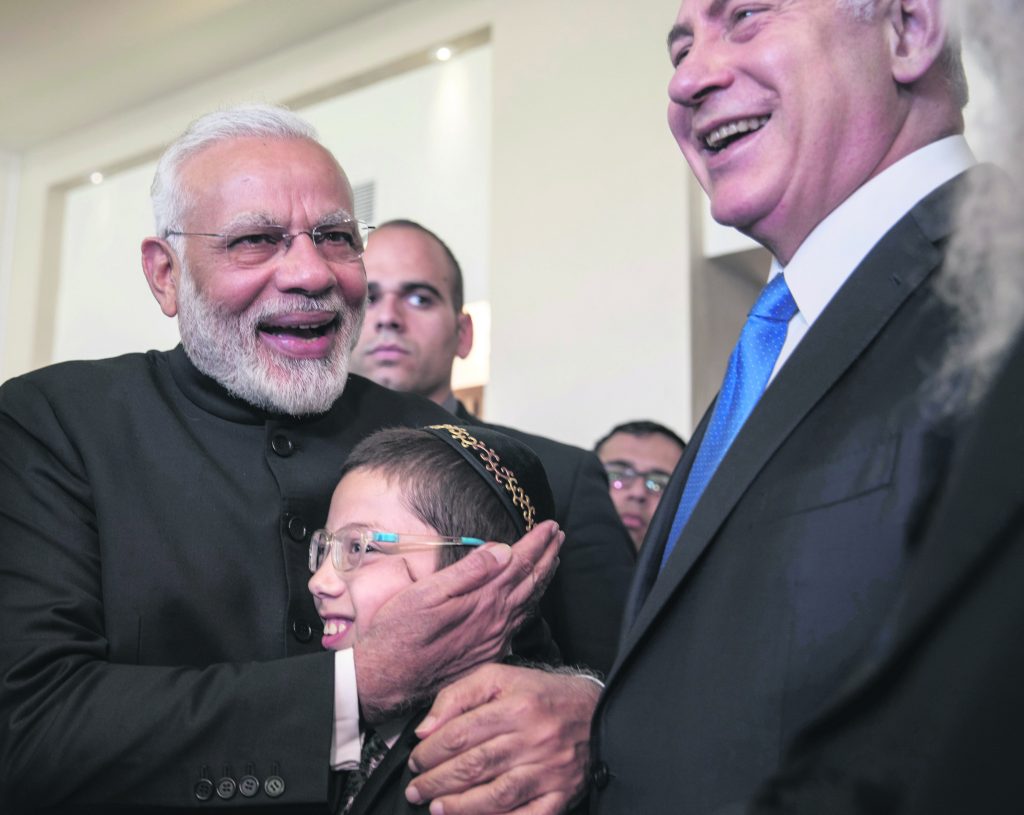 In an emotional event on Wednesday, Indian Prime Minister Narendra Modi met with 11-year-old Moshe Holtzberg, survivor of the 2008 Mumbai massacre, along with Israeli Prime Minister Binyamin Netanyahu, Moshe’s grandparents and the former Indian nanny who saved him.

When Moshe extended his hand to shake the Indian leader’s, Modi embraced him and kept his arm around the boy as he read a prepared greeting, in which he stated his desire to return to India and take up the work of his slain parents Rabbi Gavriel and Rivka Holtzberg, Hy”d, who were Chabad emissaries.

Immediately after Moshe completed his statement, Netanyahu informed him that the Indian prime minister has invited him [Netanyahu] to visit him in India, “and you are coming with me.”

Modi said that his country is open to the boy.

Moshe traveled to the meeting in Yerushalayim from Afula, where he resides with his maternal grandparents, Rabbi Shimon and Yehudit Rosenberg, who were present for Wednesday’s event, along the former nanny, Sandra Samuel, who also now lives in Israel.

The invitation to Netanyahu to reciprocate with a visit to India was made public earlier in the day at the end of the signing of several bilateral agreements. Modi formally invited Netanyahu and his family, and Netanyahu immediately responded, “I accept.”

According to the “India-Israel Joint Statement” that diplomats from both countries issued during the ceremony, Modi extended a “warm invitation” to Netanyahu to visit India “at a mutually convenient time.”

Officials said arrangements for the visit are being made for sometime before the end of the year.

Ariel Sharon became the first Israeli prime minister to visit India in 2003, 11 years after the countries established ties, though he cut short the visit after a series of deadly suicide attacks in Israel. President Reuven Rivlin visited late last year.