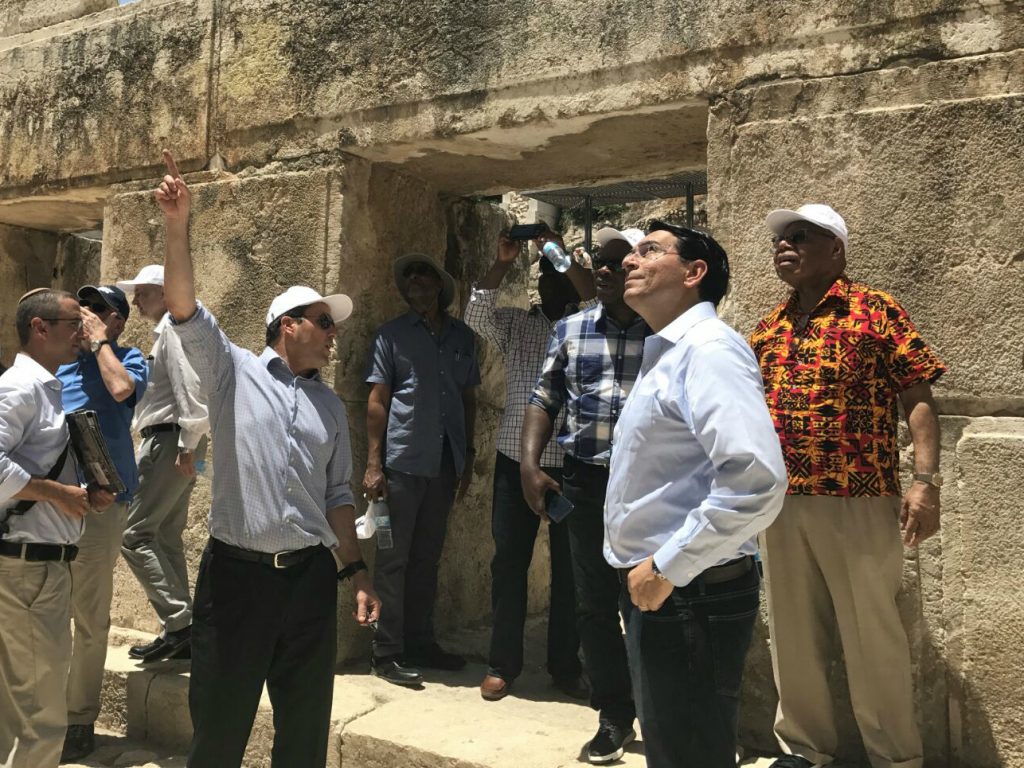 Mayor Nir Barkat took United Nations ambassadors on a tour of the City of David, the archaeological site of ancient Yerushalayim. The ambassadors are visiting Israel on a tour led by Israel’s Ambassador to the U.N. Danny Danon.

During the tour at the City of David, Mayor Barkat showed the ambassadors the largest active archaeological excavation in Yerushalayim, the remains of the Pool of Siloam, and a view of ancient landmarks from the City of David Overlook. The findings and the ongoing discoveries of millennia-old artifacts unequivocally contradict the UNESCO denial of a historical connection between the Jewish people and the City of Yerushalayim.

Barkat told the U.N. ambassadors, “The coin you see in my hands, found in the City of David excavations, is emblazoned with the inscription ‘For the Liberation of Tzion.'” This coin is one of thousands that we find at our feet, which indisputably prove the Jewish ….roots in Yerushalayim. Today, we work to fulfill the imperative emblazoned on the coin: Yerushalayim, under Israeli sovereignty, is free and open to people of all religions, beliefs and backgrounds.”

Ambassador Danon spoke of the importance of the visit: “To defeat the lies spread about our capital city at the U.N., nothing is more important than for my fellow ambassadors to learn the truth about Yerushalayim and see the beauty of this city first-hand. The more U.N. ambassadors visit Israel, the more they appreciate both the challenges we face and the opportunities that exist in our region. This is why I have visited Israel with over thirty U.N. ambassadors over the past year alone and will keep on bringing more in the months to come.”

The tour was organized by AJC Project Interchange. David Be’eri, Director and Founder of the City of David and 2017 recipient of the Israel Prize, also joined the tour.