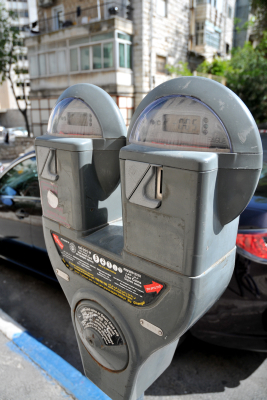 As of last Thursday, parking meters became passé in Bnei Brak. Drivers who wish to park their vehicles at “blue and white” spaces – the parking spaces that the municipality charges money for – will need to use one of the electronic parking systems in order to avoid getting a parking ticket.

Paid parking spaces are generally found in the center of towns, and Bnei Brak is no different, with Rabbi Akiva Street, Chazon Ish Street and other main thoroughfares dotted with parking meters, as they have been for the past 20-some years. Bnei Brak residents are especially disciplined parkers, the municipality said in a statement: While the average in most Israeli cities is that about 40 percent of the parking tickets are written for residents of that city, in Bnei Brak only 16.4 percent of tickets are written for residents, with the rest – 83.6 percent – written for drivers from “out of town.”

Over the years, the parking meters in the city have been upgraded, but a recent study indicates that the vast majority of drivers – some 94 percent, the city said – do not use them at all, instead choosing to pay through electronic means, either via an app or the electronic “refillable” EZ-Park system, which drivers activate when they park and display in their front window. Also valid for parking are two popular apps, Pango and Cell-o-Park. For users of those apps, parking enforcement officials connect to a database in which the app registers the vehicle as “paying” for their parking space.

Since so many drivers are eschewing the meters, and since they cost so much to maintain, the city said in its announcement, the meters will be removed over the coming months, making the sidewalks more navigable for the many pedestrians who use them, it said.