Israel ‘Scandal’ of Imprisoned Boy Turns Out to Be Misunderstanding, Report Says
Israel 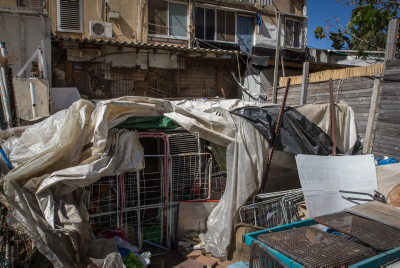 A scandal that shocked Israel last week has apparently turned out to be nothing more than a case of a lack of communication, as a 14-year-old boy who was found in what was described as “appallingly filthy” conditions in a room that, according to media reports, he had not been allowed to leave for nearly his entire life, is to be returned to his parents. According to the report Sunday on Channel Two, the negligence that the child is said to have experienced was considerably less severe than the media had made it out to be, and an investigation lent credence to his parents’ claims that they had sought help for their child, who is not well, but did not receive any.

In the initial reporting of the story, media outlets claimed that the boy, who lives with his family in Hadera, was being held a virtual prisoner in filthy conditions. Neighbors interviewed by news outlets claimed that they had tried to help the family, but that the parents – an elderly couple from the former Soviet Union – themselves hid in their house and had little contact with neighbors. Some neighbors said that they did not know that the boy was living there, as he was never seen leaving the house.

The parents were arrested and the teen was taken to Hillel Yafeh Hospital in Hadera for treatment of what authorities said was undernourishment and neglect, while social workers tried to discuss with him the conditions of his family life. Municipal officials claimed that they did not know anything about the family, and that city social workers were not aware that they were living in dire poverty – and that they had “imprisoned” their son.

The parents, for their part, told police that the youth was weak and prone to infections, and that they generally kept him away from outsiders in order to preserve his health. The parents added that they indeed took their son outside on a regular basis, but were very careful not to allow him to overexert himself. Police questioned the parents and released them, while the city’s welfare department ordered that the parents be allowed to visit the son only when accompanied by a social worker and a police officer.

By Sunday, however, the story appeared to have been a big misunderstanding, as officials quoted by Channel Two said that the boy would be likely released to the family. He has not attended school for some years, and the parents have promised to allow him to go to school and to work with city officials to help him to be absorbed into society. Officials also promised to help the family improve its living conditions.

According to the family’s attorney, the youth’s mother “several times sought help and met with social workers, but the city did nothing. The family is appealing to the National Insurance Institute (Bituach Leumi) for assistance, which has not been forthcoming. They are good people but the family is weak socioeconomically, compounded by the child’s poor health, which has plagued him since birth,” the attorney said.