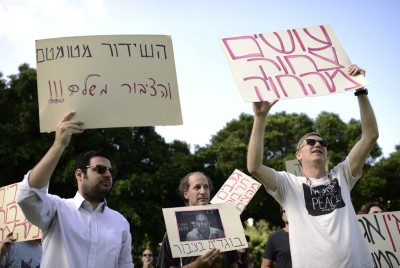 Months of protests and tearful appeals to both the public and legislators could not stave off the closure of the IBA, Israel Broadcasting Authority – a process that began Tuesday night, when the 49-year-old Mabat nightly newscast ran its last edition. The seven radio stations that are part of the IBA – which includes stations that broadcast news, chat shows, music, as well as religious content (Moreshet) – will close their operations on Wednesday night.

The decision to shutter operations came as a surprise to the IBA’s 1,050 workers. The closure was ordered by State Receiver David Hann, after the passage on its second and third reading Tuesday of the law establishing the Israel Broadcasting Corporation. A last-minute snafu on that vote was avoided when United Torah Jewry and Shas decided to support it, after IBC backers promised that the new corporation would include a new radio station geared for the chareidi public. The current religious content station Moreshet, whose audience is among the religious Zionist community, will continue to broadcast under the IBC.

IBA employees had been under the impression that they had until at least May 15th before the Authority closed down, and had been hopeful of a last-minute reprieve. Anchor people and news readers on the final edition of Mabat Tuesday night openly cried on camera, bemoaning the shuttering of an institution that is almost as old as the state itself. Speaking to other media outlets Wednesday morning, workers were furious at the last-minute firings. “We didn’t have a chance to organize properly, to say good-bye to our audience and each other,” one producer told Army Radio. “Now many of us will go home without jobs and without futures.”

As far as the future is concerned, Hann said that since the IBC was now the representative public broadcaster, it would be proper to allow it to operate without interference. The IBC officially opens on May 15th, but experimental and test broadcasts are expected to take place before that.

Perhaps the main reason for the tears at the IBA is the fact that many of the Authority’s workers are out of a job altogether. The IBC had promised to absorb as many IBA workers as possible, but only 440 have been hired so far. 359 received full-time gigs, and the rest are working only part time. The IBC said that it was working on hiring an additional 60 IBA workers. Other IBA workers were supposed to be placed in other jobs in government corporations according to the deal worked out by MKs to replace the Authority with the IBC, but it is not clear when this will happen, IBA workers said; no workers have been placed in those jobs yet.

Several weeks ago, tensions between Prime Minister Binyamin Netanyahu and Finance Minister Moshe Kahlon about whether or not to shut down the IBA – or to nip the activities of the IBC in the bud – caused a near coalition crisis, with the prime minister preferring to keep the IBA as is, and Kahlon demanding that Netanyahu stick to his original commitment to shutter the IBA.

As part of their compromise, the two agreed that a separate organization that would be responsible just for news would be established. The vote on the second and third reading of that act will take place Wednesday night in the Knesset. If the plenum approves it, the news organization will be able to begin broadcasts on May 15th. Until then, however, a major source of news for Israelis – Israel Radio’s Reshet Bet was by far the most popular news station in the country – will be off the air. Army Radio said that it would be ready to handle the challenge of being the country’s main news source, at least for a few days.