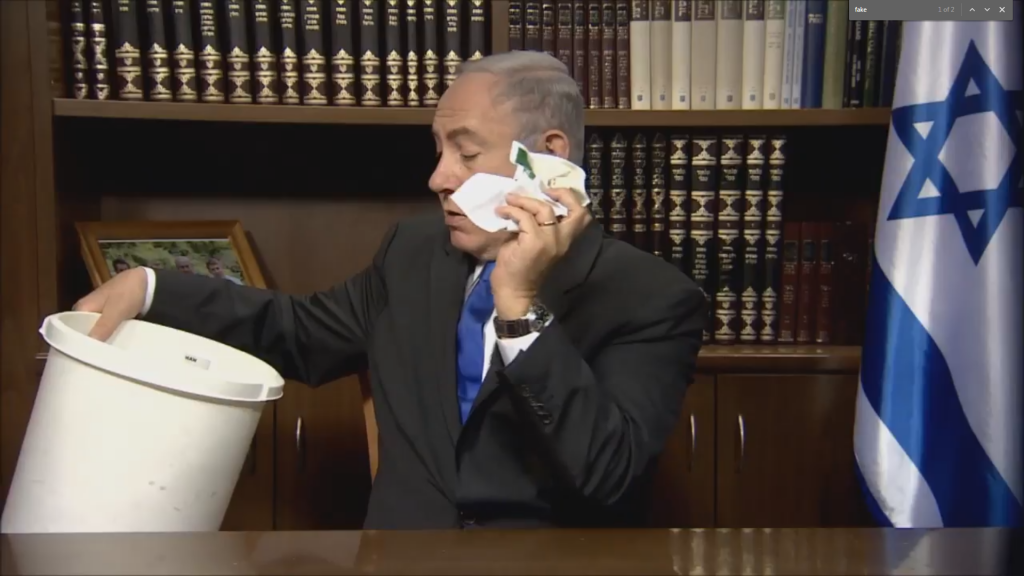 Israeli Prime Minister Benjamin Netanyahu on Sunday symbolically tossed into a bin a Hamas policy paper published last week that set out an apparent softening of the Palestinian Islamist group’s stance towards Israel.

In a document issued last Monday, Hamas said it was dropping its longstanding call for Israel’s destruction, but said it still rejected the Jewish state’s right to exist and continued to back “armed struggle” against it.

The Israeli government has said the document aimed to deceive the world that Hamas was becoming more moderate.

Netanyahu, in a 97-second video clip aired on social media on Sunday, said that news outlets had been taken in by “fake news.” Sitting behind his desk with tense music playing in the background, he said that in its “hateful document,” Hamas “lies to the world.” He then pulled up a waste paper bin, crumpled the document into a ball and tossed it away.

“The new Hamas document says that Israel has no right to exist, it says every inch of our land belongs to the Palestinians, it says there is no acceptable solution other than to remove Israel… they want to use their state to destroy our state,” Netanyahu said.

Founded in 1987 as an offshoot of the Muslim Brotherhood, the banned Egyptian Islamist movement, Hamas has fought three wars with Israel since 2007 and has carried out hundreds of armed attacks in Israel and in Israeli-occupied territories.

Outgoing Hamas leader Khaled Meshaal said Hamas’s fight was not against Judaism as a religion but against what he called “aggressor Zionists.” Ismail Haniyeh, Hamas’s leader in the Gaza Strip, was named on Saturday to succeed Meshaal.

Netanyahu concluded his clip by saying that “Hamas murders women and children, it’s launched tens of thousands of missiles at our homes, it brainwashes Palestinian kids in suicide kindergarten camps,” before binning the document.