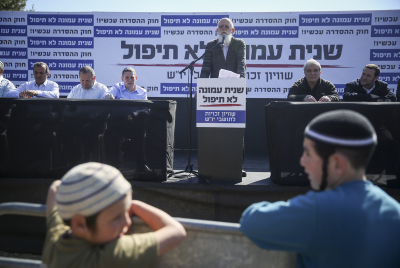 The Knesset vote on the Settlements Arrangement Law on its second and third reading, which was set for Monday, has been postponed after opponents of the law filed 500 objections to it. Under Knesset rules, each of those objections needs to be addressed, although the Knesset Speaker can choose to have similar objections addressed as single objections. The coalition offered to postpone the vote in exchange for the removal of the objections, but the opposition did not acknowledge the offer.

The Settlements Arrangement Law would replace the process now governing Arab claims of ownership of land on which Israeli homes are built. Currently, such claims are adjudicated by the High Court, but the bill would instead institute a special arbitration process that would, among other things, advocate land swaps that would replace the land claimed by Palestinians with state land of equal or greater value that is not in dispute. The law is designed to prevent the demolition of homes at outposts and settlements that were built in good faith, but later were discovered to be built on private land. It has been opposed by State Attorney Avichai Mandelblit, who said he did not think he could defend it in the High Court, much less in international courts where Palestinians are likely to file lawsuits.

But speaking Monday, Jewish Home MK Shuli Moallem-Refaeli, who together with MK Betzalel Smotrich authored the law, said that “we have held long sessions discussing this law and have heard from many international legal experts who have said the opposite of what the State Attorney said. I can only express my astonishment at his refusal to defend the law. The Prime Minister’s Office is solidly behind the law.”

Monday’s postponement came on the background of a mass rally outside the Knesset Monday, as thousands protested the upcoming demolitions in Amona and Ofra. Yesha Council head Avi Ro’eh said that the marchers had come to the Knesset “to protest the fact that until today there are still thousands of households in Yehudah and Shomron threatened with homelessness because of pending demolition orders. Fifty years after the State decided to settle Yehudah and Shomron, and with half a million people living here, we need to remove this threat. I hope we can leave today with the good news that the Settlement Arrangements Law has been passed.”

Weekend reports said that it was the Prime Minister’s Office that pushed the vote on the law up to Monday. The law had been held up until now by Prime Minister Binyamin Netanyahu, but over the weekend Netanyahu instructed Likud whip David Bitan to ensure that the votes needed to pass the law this week were in place.

One of the reasons for its holdup was the sharp criticism of the State Department in December, after the bill was passed on its first reading. Then, the U.S. expressed “grave concern” that the “profoundly damaging” bill could become law. According to State Department spokesperson Mark Toner, “Enacting this law would be profoundly damaging to the prospects for a two-state solution.” However, with Toner and his boss – former President Barack Obama – out of office, Netanyahu feels more confident about moving forward with the law, government sources said.