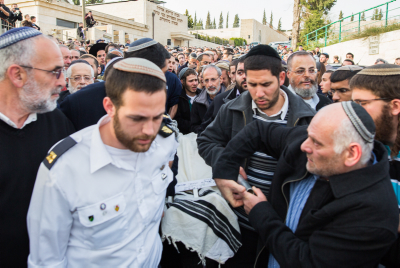 Khaled Kutina, who ran down and killed Shalom Yochai Sherki, Hy”d, in April 2015, was sentenced to life plus 20 years in prison Monday by a Yerushalayim court. In the attack, he also badly injured 20-year-old Shira Klein in the car ramming attack at French Hill in Yerushalayim. Shalom Sherki, 25, was the son of Rabbi Uri Sherky, well-known in the French Jewish community in Israel, and brother of Channel Two journalist Yair Sherki.

Sherki and Klein were waiting at a bus stop in French Hill when Kutina and a companion slammed into them. The incident occurred on the eve of Holocaust Memorial Day, and under questioning Kutina stated that he had specifically chosen that day to attack Jews.

In a separate decision, two Arab terrorists who had planned to carry out a terror attack against Israelis on behalf of the Islamic State terror group were sentenced to ten and nine years in prison respectively. The two pleaded guilty in a plea arrangement to charges including conspiracy to commit a terror act, and other charges. The two were convicted last November. They have been in custody since the trial.