Israel Officials: We Stopped Over 1,200 Smuggling Attempts Into Gaza
Israel 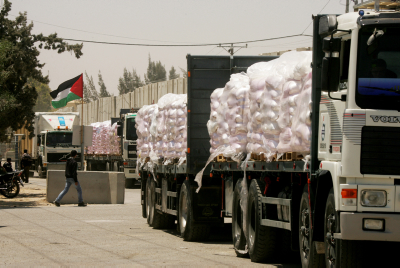 Israeli border officials prevented 1,226 instances of smuggling into Gaza in 2016, officials at the Kerem Shalom border crossing said Sunday. The crossing is the main one used by Gaza residents to import goods via Israel. The figure represents a 165 percent increase in smuggling attempts over the year before, officials said.

Israel has refused to allow Gaza to develop its own seaport for the importing of goods, for fear that Hamas would use it to import arms and weapons directly. Israel has arranged for Gaza residents who wish to import goods that do not incur a security risk via Ashdod port. The goods are then shipped to Gaza by truck.

On a daily basis, dozens of trucks bring in a wide array of imported goods into Gaza, but in many of them, border officials who check the goods at the Kerem Shalom terminal have discovered a wide range of goods that Israel does not allow the importation of that could be used for terror purposes or war. Among the goods: Military equipment, night vision lenses, engines for jeeps, unauthorized aluminum and steel pipes (for use in building pipe bombs), metal ball bearing manufacture equipment (for making bullets), diving equipment (for use by Hamas frogmen to attack Israel from the sea) and much more. Many of these goods were hidden in innocent-looking shipments of medical supplies and toys.

Defense officials congratulated border inspectors for their alertness, and said they would continue to remain vigilant and on guard in order to prevent Hamas from smuggling contraband into Gaza that could be used to attack Israelis.