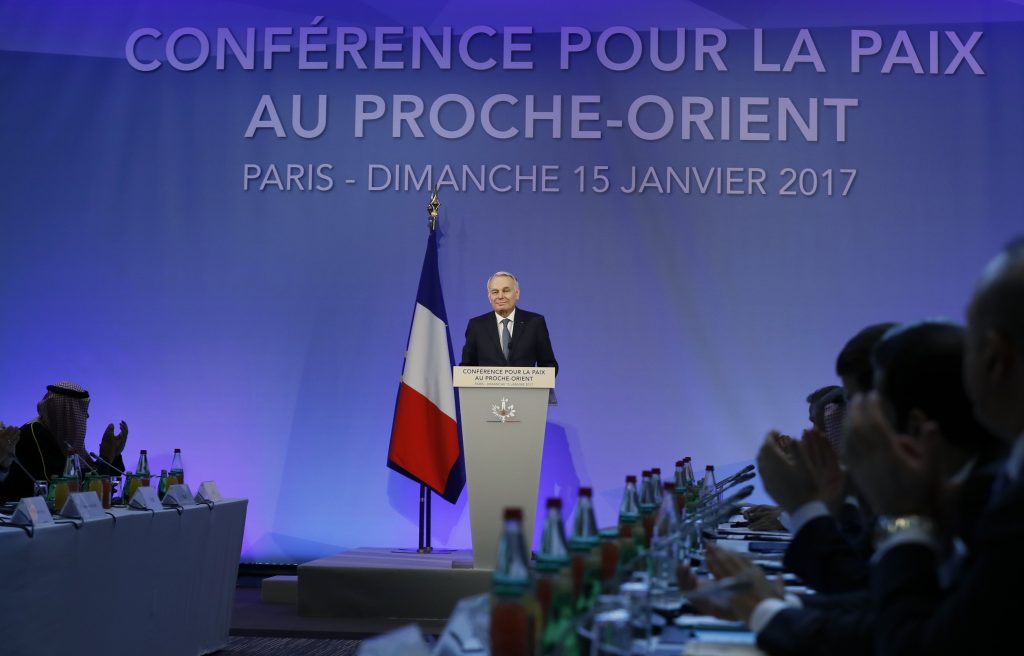 The Paris peace conference that opened Sunday is “an unnecessary event that will do no good. This is not the way to make peace,” government officials were quoted Motzoei Shabbos. “Any decisions made will not obligate Israel in any way.”

The fact that neither Israel nor the Palestinian Authority will be present at an event that is ostensibly geared to supporting a deal between them is reason enough not to take it seriously, said Israel’s ambassador to the U.N. Danny Danon. Speaking to Army Radio Sunday, Danon said that the event “is like a wedding where the guests arrived, but there was no bride and groom. I cannot understand why they called this conference.”

The representatives of 72 countries, including the United States, will gather to discuss the Middle East peace process. Representing the United States will be outgoing Secretary of State John Kerry, in what is likely to be his last official mission. State Department spokesman Mark Toner said Thursday that Kerry was going to the conference in order to defend Israel. “I think we feel obliged to be there, to be part of the discussions, to help make them into something that we believe is constructive and positively oriented towards getting negotiations back up and running and doesn’t attempt to in any way kind of dictate a solution,” Toner said.

Although he has less than a week left in his tenure, Israel fears that the Paris conference is a prelude to another “last-minute surprise” by Barack Obama’s administration. Israeli officials said that there was a distinct possibility that the conclusions of the conference – which would presumably set specific criteria for what the conference expects a final-status settlement to look like – could be adopted by the U.N. Security Council. That would further complicate Israel’s relationship with that body, after it was already badly impacted by the Security Council resolution last month against construction in Yehudah and Shomron.

Speaking Sunday, Danon expressed hope that Trump would foil further anti-Israel moves at the U.N. – or repudiate them when he takes office. “There will be a small event next Friday – a new president will be moving into the White House – and I believe that he will have a different attitude. I believe we will hear the president-elect discuss the need for negotiations between both sides without resorting to strange decisions and conferences such as this one.”

Home to Europe’s largest Muslim and Jewish communities, France has tried to breathe new life into the peace process over the past year. It believes that, with the uncertainty surrounding the way the next U.S. administration will handle the issue, it is important to push the sides back to talks rather than allowing a fragile status quo to fester.

But with elections coming up this year in France and Germany, and Britain appearing to align itself more closely with the Trump administration on the issue, the prospects of the EU, the largest economic partner for both Israel and the Palestinians, taking a lead on the matter appear unlikely.

Arab states have their own concerns about how Trump’s relationship with them will turn out, and have taken a cautious line.

“All this is premature. We need to give the new U.S. administration time to assess what they want to do,” said a Middle Eastern diplomat based in Paris.