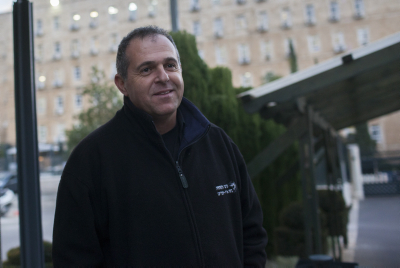 In an example of the Israeli version of “fake news,” the mayor of Beit Aryeh, Avi Naim, accused Yediot Achronot of making up comments the newspaper claims Prime Minister Binyamin Netanyahu said in a meeting with Amona residents. According to the report, Netanyahu told residents that he, too, knew what it was like to be evicted from his home – like in 1999, when he had to move out of the prime minister’s residence.

Speaking to Israel Radio, Naim said that there was no connection between the quotes used by Yediot and what the prime minister actually said. “I was at the meeting that lasted for hours, and to pull out one quote that wasn’t even made to represent the meeting’s proceedings is ridiculous.” Netanyahu worked all night Motzoei Shabbos to close a deal for Amona residents, and to prevent a violent showdown between protesters and police, Naim said. “He displayed exceptional leadership. Instead, they prefer to publicize lies.”

In the Yediot report, Netanyahu is quoted as telling Amona residents, who will be moving out of their homes in the coming days to a caravan neighborhood that is being prepared for them, that “I, too, know what it is to lose a home. After the 1999 elections, with no warning at all, they threw me and my family out of the prime minister’s home. Just like that, they threw us out, with all our stuff. We had to take refuge in the Sheraton Plaza hotel. It’s a terrible feeling.”

According to the report, Amona residents reacted sharply to the comments. The prime minister’s office has not yet commented on the report. “Netanyahu did not say he moved to a hotel, and the entire exchange was taken out of context,” Naim said. “All he said was that he had to leave his home the day he lost the election, even though he asked for a few days to pack. He did not compare himself to Amona residents.”

In a statement, the Amona residents committee also said that the report was incorrect.  “Unlike what has been reported, the prime minister did not make fun or light of our situation, nor did he treat it in an insensitive manner. Just the opposite: He displayed great empathy and a genuine desire to help us as much as possible to relieve the pain and pressure resulting from the demolition of our homes.”

The report made for biting commentary by opposition MKs. In a social media post, Meretz head Zehava Gal-on said that “once I was also forced to spend a night at the Plaza. It was terrible – the bed was too firm, the salad bar at the buffet was wilted, and we had to pay extra for a bread basket.” Zionist Camp MK Tzippy Livni, adding to her comments, said that “Netanyahu is right to compare himself to Amona residents. Both tried to remain in a place where they didn’t belong, and we are all paying the price.”

Amona residents late Sunday afternoon voted to accept a revised arrangement that would have them evacuate their homes and move to several parcels on the same hilltop administered by the state. According to the arrangement, evacuated residents will stay in caravans to be built on several land parcels on the Amona hilltop. The state guarantees that the caravans will remain in place until new homes being built for them in the nearby community of Shiloh are ready. In addition, the state will examine the possibility of constructing 52 permanent homes and communal buildings on the hilltop, on state land that the government is confident will not be challenged by absentee Arabs who will claim ownership of the land, as happened with the existing homes in Amona. The deal will initially provide caravans for 24 of the 40-some families currently living in Amona.