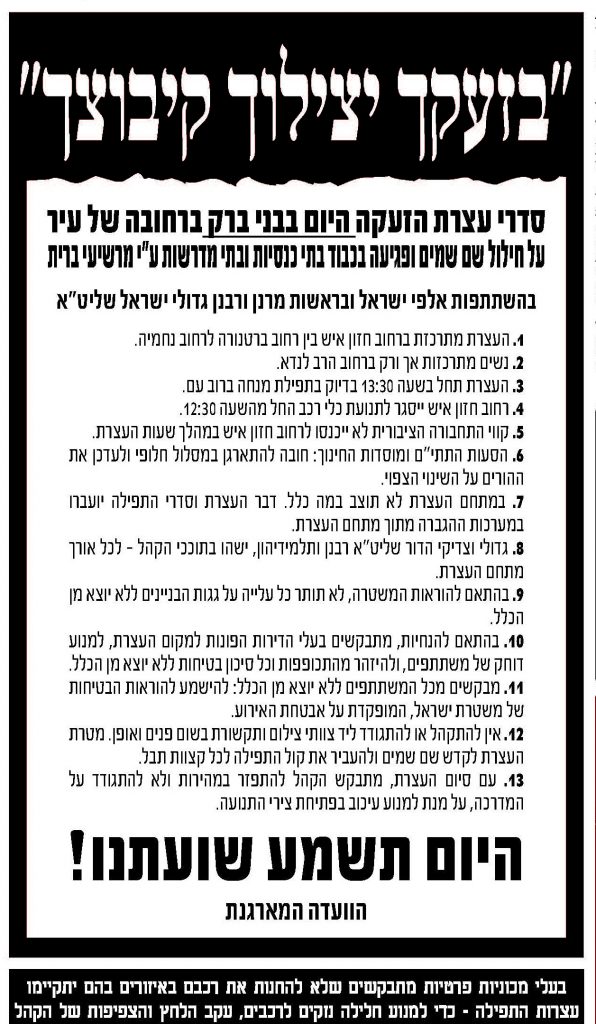 The first of three mass rallies to protest an unprecedented campaign against the Torah community in Israel will be held in Bnei Brak on Tuesday at the behest of Gedolei Yisrael.

Minchah with the participation of leading Rebbes, Roshei Yeshivah and Rabbanim, shlita, will be followed by the recitation of Tehillim and conclude with kabbalas ohl malchus Shamayim. Women will gather on Rechov Harav Landau. The time of the event was chosen to ensure that it would not interefere with the sedarim of yeshivos and kollelim.

A rally is scheduled for Ashdod on Wednesday and Yerushalayim on Thursday.

The mass protest comes in response to incitement against the chareidi community of Arad, where tefillos were disrupted at a beis knesses on Shabbos and where the municipality has spearheaded a campaign to drive chareidim out of the city.

The organizers of the event met on Sunday with police officials to arrange for security and orderly traffic flow. Over 100 police officers were assigned to keep order. In addition, participants in the rally are cautioned to avoid any provocation by anti-religious agitators and to follow the instructions of the police.