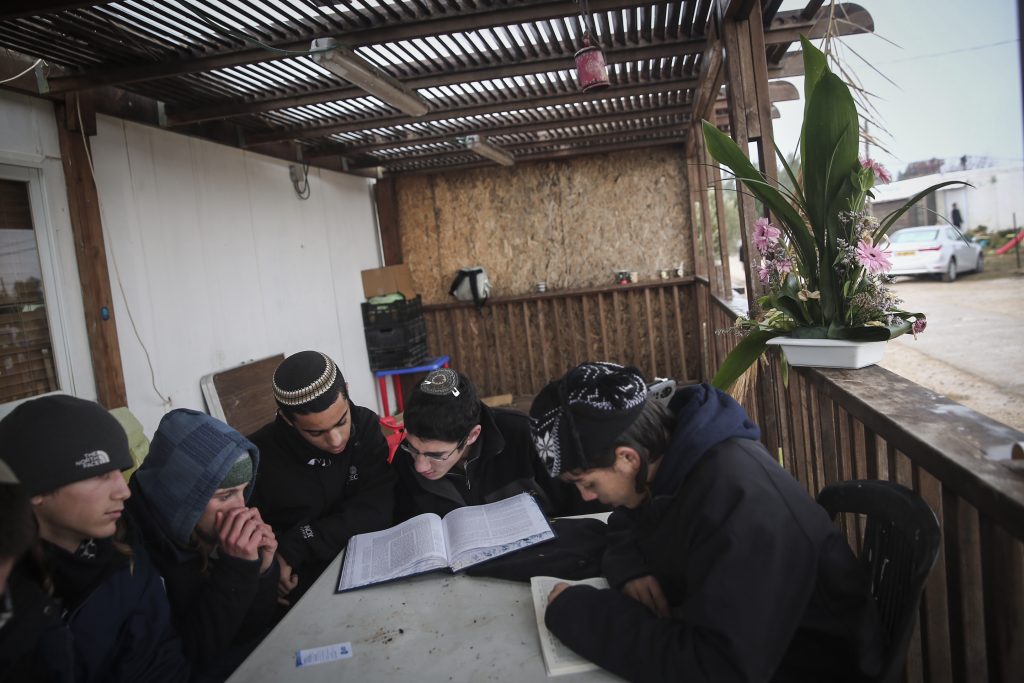 Amona residents late Sunday afternoon voted to accept a revised arrangement that would have them evacuate their homes and move to several parcels on the same hilltop administered by the state. The residents voted in favor of the deal by a vote of 45 in favor and 25 opposed, with 2 abstentions.

According to the arrangement, evacuated residents will stay in caravans to be built on several land parcels on the Amona hilltop. The state guarantees that the caravans will remain in place until new homes being built for them in the nearby community of Shiloh are ready. In addition, the state will examine the possibility of constructing 52 permanent homes and communal buildings on the hilltop, on state land that the government is confident will not be challenged by absentee Arabs who will claim ownership of the land, as happened with the existing homes in Amona. The deal will initially provide caravans for 24 of the 40-some families currently living in Amona.

As a result of the deal, Amona residents said that they were “suspending” their struggle to remain on the hilltop. “Two years ago the High Court issued a ruling that ruined our lives,” the Residents Committee said in a statement. “After 20 years of selfless efforts to establish a community and two years of nightmares and fears about being evicted, we have decided to suspend our efforts and accept the state’s proposal to build 52 new homes in Amona. We have decided to give the state the opportunity to fulfill its promise to enable us to build our community and future in Amona.”

The residents also thanked the “thousands of supporters, youth and families, who stood with us in recent days,” referring to the many who gathered on the hilltop to resist a forced evacuation by police. “Thanks to your efforts, Amona was a top priority for Israelis. We are in debt to you, and the Land of Israel is in debt to you. We love and appreciate you.”

With that, the residents said, “We will remain on our watch to ensure that the state fulfills its promises. If the state does not hold to its promises, we will not hesitate to renew our struggle with even more determination. We will not allow Amona to fall again.”

The last-minute deal comes just days before the December 25 deadline issued by the High Court for the demolition of some 40 structures on the Amona hilltop. The demolition orders were issued in 2014, when the court accepted claims by Arabs that they own the land on which the homes stand. Incited by leftwing Israeli groups, the Arabs refused all offers of compensation to allow the residents to remain. The claimants are not residents of Israel or the Palestinian Authority; they live in Jordan and thus are unable to actualize any claims. As a result, the land will remain unused. It is not clear if the rubble from the demolished homes will be cleaned up.

In response to the situation, Jewish Home and Likud MKs authored the Settlement Arrangements Law, which would replace the process where such claims are adjudicated by the High Court with a special arbitration process that would, among other things, advocate land swaps that would replace the land claimed by Palestinians with state land of an equal or greater value that is not in dispute. The law is designed to prevent the demolition of homes at outposts and settlements that were built in good faith but later were discovered to have been built on private land.

Commenting on the new development, Jewish Home MK Betzalel Smotrich said that the residents had made the right choice. “The right and just efforts of the Amona residents to remain on the hilltop was a strong motivator for the government to take action, resulting in the Settlement Arrangements Law. Their insistence on remaining hopeful led us to legislate the law that will ensure the future of many other homes in Yehudah and Shomron, and will enable Amona residents to remain on the hilltop,” Smotrich said.