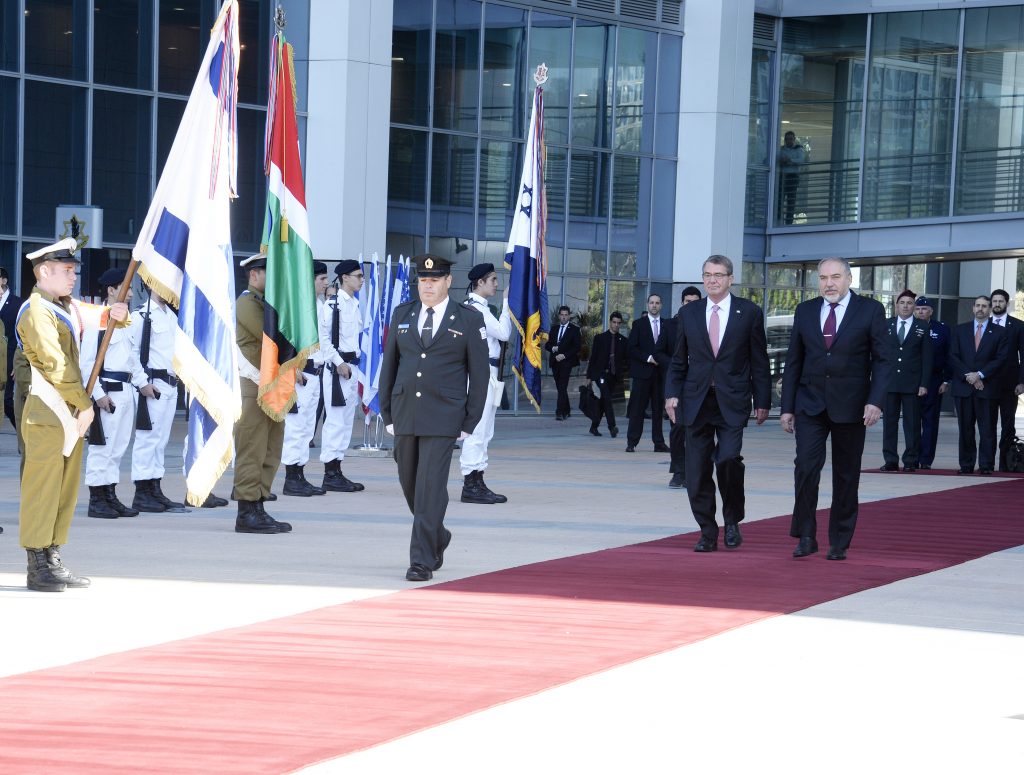 The F-35 is the Pentagon’s most expensive weapons program, with an estimated cost of nearly $400 billion. Israel is among a small number of allies to get the plane.

Defense Minister Avigdor Liberman said the fighter jets “present another component in maintaining air superiority in our region” and expressed gratitude to Carter, who was welcomed with a military honor guard at a Tel Aviv army base.

The jets were supposed to touch down in Israel in the early afternoon, but the Israeli military said their arrival was delayed due to weather conditions in Italy. Neither U.S. nor Israeli officials provided further details.

The deputy commander of the Nevatim Air Force base in southern Israel said the new fighters will give Israel an upper hand over its neighbors for years to come.

“It’s a message for everybody that Israel will keep on holding the high-end technology in this area,” said Col. Asaf, who could be identified only by his first name in line with military regulations.

The purchase of the F-35 elevates the entire Israeli air force to a higher level, the colonel said, adding that four Israeli pilots have been trained to fly the planes and that more will be shown how to use them.

“This specific airplane is going to be a very good one for the next decades,” he said.

In November, a senior Israeli air force official described the arrival of the F-35 as a game-changer, citing its various cutting-edge systems, which would preserve Israel’s ability to act freely in hostile airspace. He cited its long-range capability, its provision of critical data in real time and a stealth system that can evade or delay detection by the world’s most sophisticated radar systems.

Speaking on condition of anonymity under military briefing guidelines, he said it would take “more than a few months” for the first planes to be operational.

In recent years, Israel has reportedly carried out long-range airstrikes as far away as Sudan, and is believed to have struck Hezbollah-bound weapons shipments in neighboring Syria.

Israel has also hinted in the past at making plans to strike Iran, some 625 miles away, if the Islamic Republic presses forward with its nuclear program. The threat of Israeli action in Iran has dropped since last year’s nuclear accord.

The Pentagon’s F-35 program has been criticized by members of the U.S. Congress over testing problems, delays and cost overruns. International buyers include Britain, South Korea, Israel, Italy, Australia, Canada, Turkey and Japan.

While the planes were stuck in Italy, President-elect Donald Trump lashed out against the program. “The F-35 program and cost is out of control,” he posted on social media. “Billions of dollars can and will be saved on military (and other) purchases after January 20th,” he wrote.

Prime Minister Binyamin Netanyahu’s office announced last month that his Security Cabinet approved the purchase of 17 additional F-35s. In all, it said, the acquisition will bring the number of planes the air force will get to 50.