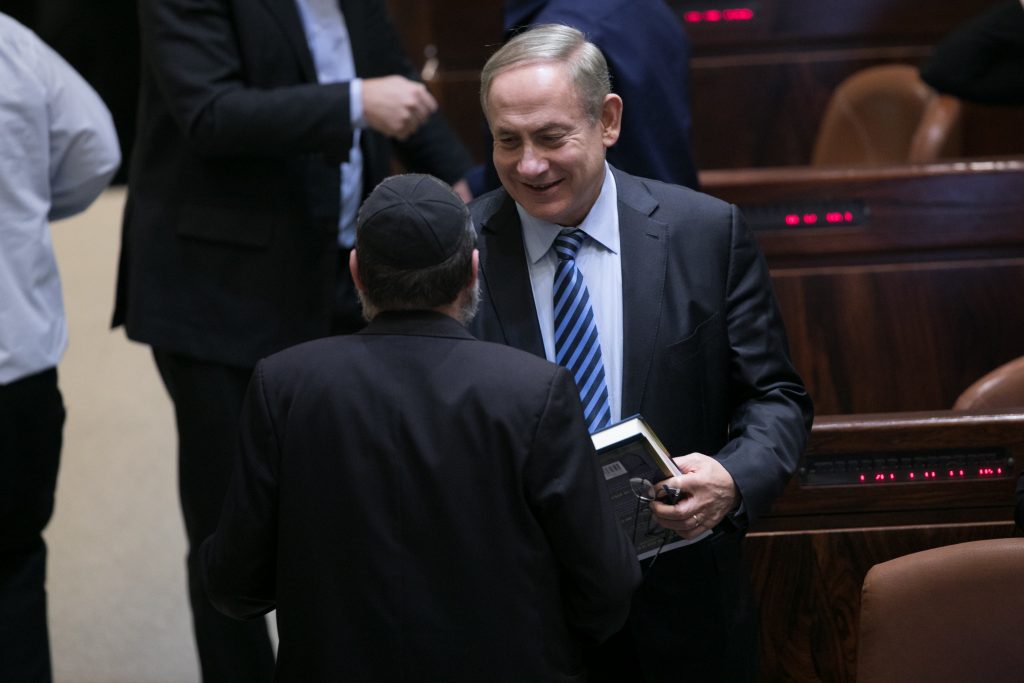 The Settlements Arrangement Law passed its first Knesset reading Monday night, with 60 MKs in favor and 49 against. The law now goes back to committee for further work in preparation for is second and third reading, and its eventual legislation.

That’s if the law gets that far. Opponents of the law wasted no time filing a petition against the law’s constitutionality with the High Court minutes after it passed on its first reading.

Generally, it would fall to the state attorney to defend a bill against such actions, but it wasn’t clear if the current state attorney, Avihai Mandelblit, would agree to argue in favor of the bill at the High Court. Earlier Monday, Mandelblit said that he was opposed to the Settlements Arrangement Law even in the form that it passed — without the controversial section that would have applied to Amona.

The Settlements Arrangement Law would replace the process in which claims by Arabs that they own land that Israeli homes are built on are adjudicated by the High Court. The bill would instead institute a special arbitration process that would, among other things, advocate land swaps that would replace the land claimed by Palestinians with state land of equal or greater value that is not in dispute. The law is designed to prevent the demolition of homes at outposts and settlements that were built in good faith, but later were discovered to be built on private land.

The original version of the bill included a section that would have specifically grandfathered the law to include Amona, but Mandelblit — along with Finance Minister Moshe Kahlon — opposed that section, saying it was designed to outmaneuver a High Court decision. In the end, Jewish Home MK Bezalel Smotrich, sponsor of the bill, dropped that section, paving the way for Kahlon and his Kulanu party to vote in favor. All members of the coalition — with the exception of Likud MK Benny Begin — raised their hands to support the bill in Monday night’s vote.

Prime Minister Binyamin Netanyahu, who along with Kahlon had been very hesitant to support the bill, put the full weight of the coalition behind it after the Amona clause was dropped. That came about as the result of talks Sunday night between Netanyahu and Jewish Home leader Naftali Bennett. Earlier, Bennett praised the bill, saying that “its passage marked the moment that the right began to reign again in Israel. This is as great a revolution as that of 1977,” the year Menachem Begin, z”l, formed the first non-Labor Party government in Israel’s history, Bennett said. Smotrich, who was an outspoken critic of any compromises that would force residents of Amona to leave their homes, called the law’s passage a “true accomplishment. The Settlements Arrangement Bill is an amazing accomplishment for the right,” Smotrich said. “We may not have achieved a 200-percent result, but we have achieved a 100-percent result.”

Speaking on Army Radio Monday, Justice Minister Ayelet Shaked admitted that Amona was to be the “sacrificial lamb” which, in its destruction, will ensure a bright future for Jewish settlement in Yehudah and Shomron.

“This is a historic law,” she said. “The residents of Amona are paying a heavy price, but it will not be for naught. The price they pay will allow us to ensure the arrangement of other communities in Yehudah and Shomron.”

She urged residents to leave their homes peacefully and accept the arrangements agreed upon by Netanyahu and Bennett.