Israel Erdan: At Least Half of Israeli Fires Were Arson; Four Arrested
Israel 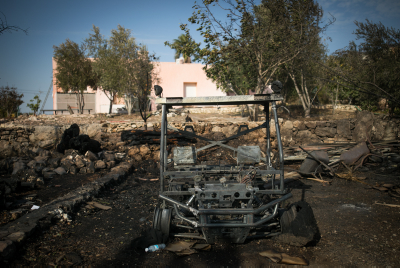 Firefighting crews, planes and equipment arrived in Israel Thursday, as a third day of hot, dry winds blow through the country, bringing fire havoc in their wake.

An Israeli squadron of firefighting aircraft has been in action since the fires took hold on Monday, dumping payloads of red fire-retardant material on the flames.

The Russian Beriev Be-200 emergency aircraft also came. It is an amphibious plane that can land on a lake or sea and within minutes take in over 12 metric tons of water, which it can then drop on flames.

Prime Minister Binyamin Netanyahu expressed gratitude for the assistance, saying that it was a sign of the “close cooperation” between nations to prevent natural disasters.

That assistance is coming none too soon. Thursday saw a new wave of fires breaking out in numerous areas of the country, the most serious of which was one burning near Neve Ilan, adjacent to Telshe Stone and south of Modi’in. The easterly winds, which are still gusting to over 50 kilometers per hour, have been aggressively pushing flames in another fire in the area towards Modi’in. Road 443, the secondary road between Yerushalayim and Tel Aviv, was closed for a while Thursday morning as flames and smoke approached the highway, but was opened a short time later. Residents of neighborhoods in Modi’in were instructed to remain in their homes with the windows closed, because of the heavy smoke wafting into their neighborhoods.

Police spokesman Micky Rosenfeld said most of the smaller fires were under control but there were still four major blazes that needed tackling.

Other fires that broke out Thursday included one in the Yerushalayim hills south of Road 1, at Kibbutz Harel, near the Checkpost interchange in Haifa, in the Shomron community of Talmon, and near Umm el-Faham. Residents of Talmon were evacuated from their homes early Thursday for several hours, but were allowed to return after the fire was brought under control.

Since Wednesday morning, a total of 220 fires had broken out in Israel – far too many to be a “coincidence,” many officials believe. Police officials were quoted by Channel Two as saying that Israel was “experiencing a wave of arson.” Public Security Minister Gilad Erdan said Thursday that “half of the fires are being deliberately set,” and ordered police and Border Guards to patrol open areas and forests in the hope of finding who is setting the fires.

Police have arrested four Palestinians in connection with one of several large fires that damaged homes and prompted the evacuation of thousands of people over the past few days.

Rosenfeld said on Thursday that police are investigating all possible causes, including arson.

Netanyahu said Wednesday that “there are signs that some of the fires are being deliberately set, but there is no doubt that the weather conditions are making conditions much more difficult and enabling the fires to spread. What is usually a small, easily controlled fire becomes a major conflagration. Unfortunately, these conditions are not to set to change today, and perhaps tomorrow as well, so we must be prepared to deal with the problem.”

Neither Netanyahu nor Erdan said whom they thought might be responsible for the arson, but Education Minister Naftali Bennett said that whomever it was, they were not truly “sons of the land. Only those to whom the land does not belong could burn it down,” he said in a social media post.

According to fire officials, 189 of the fires were started in open areas. So far, 50 tons of fire-dousing material has been dropped from planes on the many blazes. Meanwhile, the Israel Electric Corporation warned that the ongoing fires could affect electricity supply. IEC workers were on patrol to protect high-tension wires, generators and substations, for fear that damage to them could trigger a major power outage.

According to forecasters, the winds should reach their peak on Thursday, meaning that it will be the most difficult for firefighters. Even if relief arrives over the weekend, as forecasters believe, Erdan said that the fires were still likely to remain a problem until the middle of next week.

In 2010 a major forest fire in northern Israel in similar weather conditions that raged for several days killed 42 people, prompting a reform of the firefighting services and the establishment of the airborne firefighting squadron.