Israel Russian PM: I Feel At Home in Israel
Israel 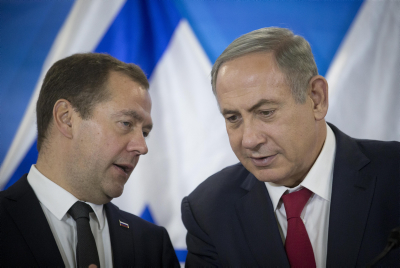 Prime Minister Binyamin Netanyahu met Thursday with his Russian counterpart, Dmitry Medvedev, as the latter visited Israel and met with government officials, community leaders, and business officials. The visit was timed for the 25th anniversary of the renewal of relations between Israel and Russia.

“This is a good day to look to the future,” said Medvedev. “It is good to celebrate what was, but we must look to what will be. The prime minister has told me of the many families with ties to Russia, and there is a special atmosphere for me here. I feel at home every time I visit Israel. Our countries have common values.”

Netanyahu requested, among other things, Russia’s assistance in retrieving the remains of IDF soldiers Hadar Goldin and Oron Shaul, Hy”d, being held by Hamas, and for Russian pressure on Tehran to prevent development of nuclear weapons.

“Regardless of what happens in Syria, we are determined to prevent Iran from setting up military bases there, on land, sea or air,” the Israeli prime minister said. “We are also determined to prevent it from providing military assistance to Shiite militias, such as Hezbollah, which Iran is arming with dangerous weapons aimed at us.”

“All Israelis are very happy at the positive change in relations between our countries, especially those Israelis who emigrated from Russia,” Netanyahu added.