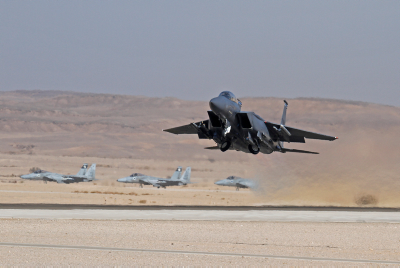 Israel this week took delivery of ten F-15D fighters, the IDF confirmed Thursday. The planes, which are not part of the annual aid package to Israel from the U.S., were retired from service in the U.S. Air Force. In addition to the F-15Ds, Israel received several Hercules cargo planes, as well as JDAM smart bombs.

The lastest F-15Ds will join a veteran, but reliable, fleet of older planes that the Israel Air Force upgrades to modern warfare capabilities. Israel has a significant number of such planes – called
“Buzz” jets in the IAF – and some have been in active service for as long as 40 years. Most of them are still battleworthy, air force officials were quoted as saying in numerous media reports, and many are used in active missions “in enemy territory.”

The newest deliveries will either be upgraded to modern standards using Israeli-developed radar, satellite, and metals technology, or used for parts. The same upgrade process will be applied to the newly arrived Hercules C-130 transport planes, the air force said.

“The arrival of the planes is a wonderful opportunity for technical upgrades, and for spare parts that will allow us to enhance the capabilities of the Buzz planes that have served Israel so well,” the air force said in a statement.