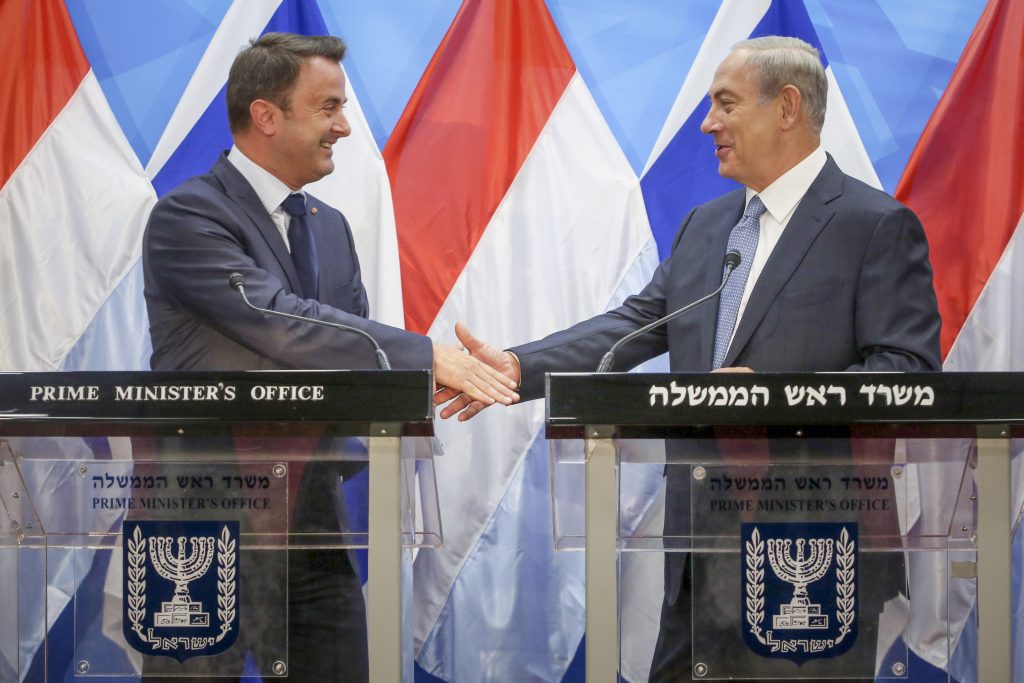 Netanyahu said to his counterpart, “This is your first visit, the first in Israel, and I hope it’s not the last. You invited me to Luxembourg. I’ve already visited Luxembourg once and I intend to do it again.

“You come, obviously, at a time of great turmoil in the Middle East, as the world looks on with horror as hundreds of thousands are slaughtered in Syria and millions stream to Europe, fleeing for their lives. We spoke about that at some length, but I think this is a time of great opportunity as well. And that gives me a great deal of hope. Israel’s partnerships and alliances around the world and in the region are growing broader and deeper. We stand together with many countries to defend civilization against the forces of militant Islamic barbarism and we stand together in the face of resurgent anti-Semitism. I expressed my appreciation for the forthright position that you took in Luxembourg regarding the events there during the Second World War, and your apology to the Jewish community was deeply appreciated.

“We also spoke about the future. We stand together to innovate and seize the future. Innovation is the key to economic growth, to utilize the promise of tomorrow’s technologies to help better the lives of our people and, I think, people around the world. Israel and Luxembourg are two small countries, but we’ve shown that we shouldn’t be judged by our size. We can do a lot of great things and we are doing them. Our small countries possess great strength and together we’ll be stronger.

“We had very fruitful discussions. I believe in this partnership and I look forward to continuing this discussion with you in Luxembourg or any other location. You are always welcome back here.”

Netanyahu added that “Prime Minister Bettel invited me to Luxembourg and said that perhaps the Palestinians would come as well. Well, it’s either Moscow or Luxembourg. We’ll see, one of them or anywhere else. We’re always prepared to have direct negotiations without preconditions.”

Luxembourg Prime Minister Bettel said that he is “very glad to be here in Israel today with my delegation.”

He noted that this is the first time a Luxembourg prime minister is visiting Israel.

Bettel said, “We are friends, Luxembourg and Israel, and our bilateral relations are excellent on the political level and also on the business level. We have a large economic delegation that is also conducting negotiations now with their counterparts here in Israel.

“We are both innovative economies, based on innovative economies. We are smart countries, as I like to refer to Luxembourg. This is why, aside from the political agenda of this visit, we had also meetings to strengthen  the economic relations between both countries. For example, Luxembourg and Israeli trade has nearly doubled from 2014 to 2015. There is a lot of potential and I’m happy that we opened a Trade and Investment Office here in Israel in 2010.

“Young people in Europe should know that we live in peace since the Treaty of Rome was signed in 1957, and that peace is not taken for granted. And we should work together to respect it, because this is the most important thing. As a political leader, preserving peace is my biggest aim and goal – to respect, to listen, to understand and to work together. So I’m very happy about the discussion we had today and I’m very confident that our future discussions will be productive as well, since we share common goals.”