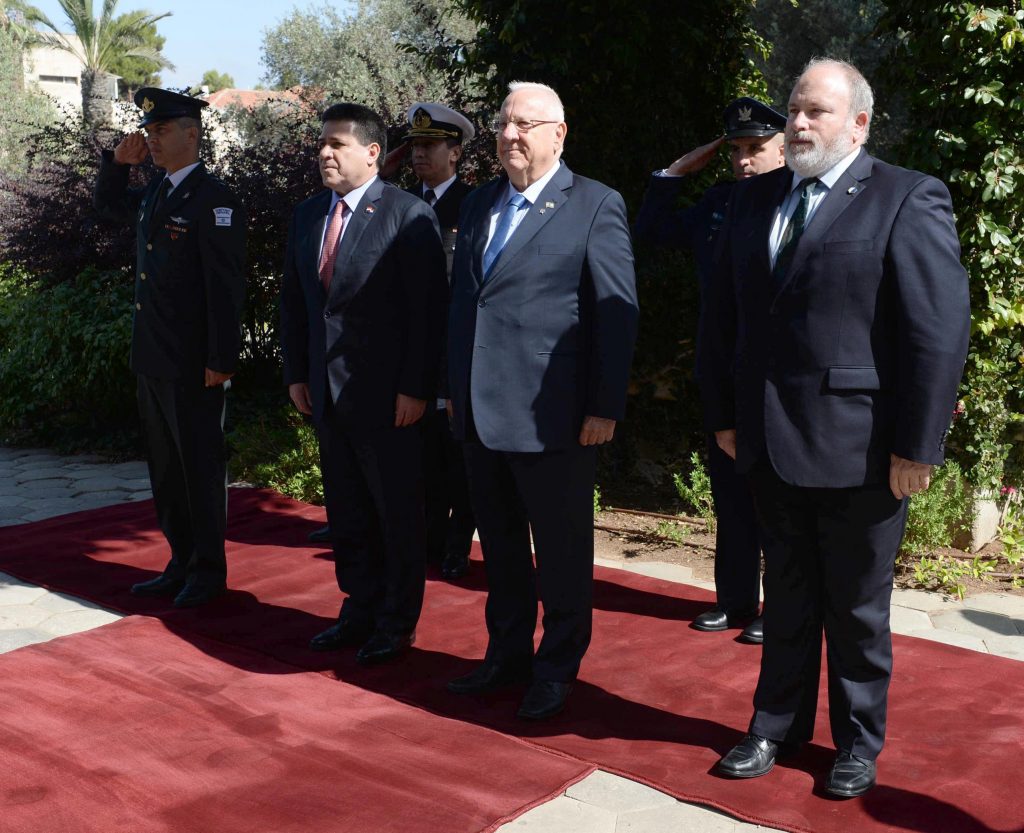 The President of Paraguay, H.E. Horacio Manuel Cartes Jara, was in Yerushalayim on Monday, meeting with President Reuven Rivlin during the first such visit by a president from the South American country.

Cartes, known to be friendly to Israel, was given a red-carpet greeting complete with an honor guard. After brief statements to the press, the two presidents went on to hold a working meeting during which they discussed the strengthening of bilateral ties between the two countries. They were scheduled to address a state dinner later on Monday in honor of President Cartes’ visit.
Soon after his electoral victory in 2013, Cartes told then deputy foreign minister Zeev Elkin, who attended his inauguration, that he intended to embark on a new policy vis-à-vis Israel. He said he was interested in strengthening bilateral relations with Israel as well as pursuing an “independent” pro-Israel policy in international forums, a break from the voting patterns of most Latin American states, according to The Jerusalem Post on Monday.

Cartes has followed up on the intention. In the UNESCO vote in April that effectively denied any Jewish connection to Yerushalayim, Paraguay was one of 17 countries that abstained. It also took Israel’s side in a vote in the IAEA last September that would have forced Israel to open its nuclear facilities to international inspectors. And in 2015 it was not present for a vote on a U.N. resolution that mandated raising of the Palestinian flag at the world body.

Also, in 2014 Cartes stood by Israel during Operation Protective Edge, and did not condemn Israel, in contrast to of its neighbors – such as Brazil, Peru, Chile, El Salvador and Ecuador – who recalled their ambassadors in protest.

On Tuesday, he is slated to meet Opposition leader Isaac Herzog, and then Prime Minister Binyamin Netanyahu, where several bilateral agreements will be signed, prior to flying home that afternoon.