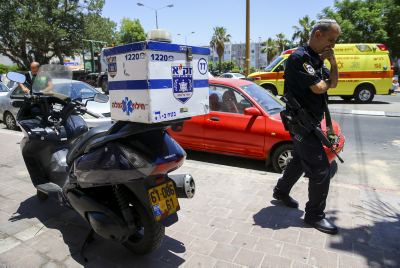 After the latest incident of a child dying from heat stroke due to being forgotten in a vehicle, the National Council for the Welfare of Children is calling on the Transport Ministry to require that all parents be required by law to add an alarm system to their vehicles that would alert them in case they forgot their children in it. The demand comes after the death of a six-month-old infant on Tuesday in Arad; the child was forgotten inside a vehicle in the industrial zone of Arad for several hours – left there by her grandmother, who had forgotten that the infant was in the back seat.

Large numbers of rescue personnel arrived immediately after getting a phone call about the infant, phoned in by the grandmother herself when she realized what had happened. Despite their efforts, they were unable to revive the infant. An initial police investigation indicates that the grandmother was supposed to drop the infant off at a day care center on her way to work, but apparently forgot.

Three weeks ago, two infants died in similar circumstances in the Arab town of Al-Kasoum. In May, a forgotten infant died in Ashdod. Over the past eight years, there have been 22 similar deaths, many of them occurring in the summer, when the inside temperature of a vehicle can easily reach well in excess of 110 degrees.

According to Vered Windman, Chairperson of the Council, that’s reason enough to require parents to install safety alarms that will alert them if their children are left inside a vehicle.