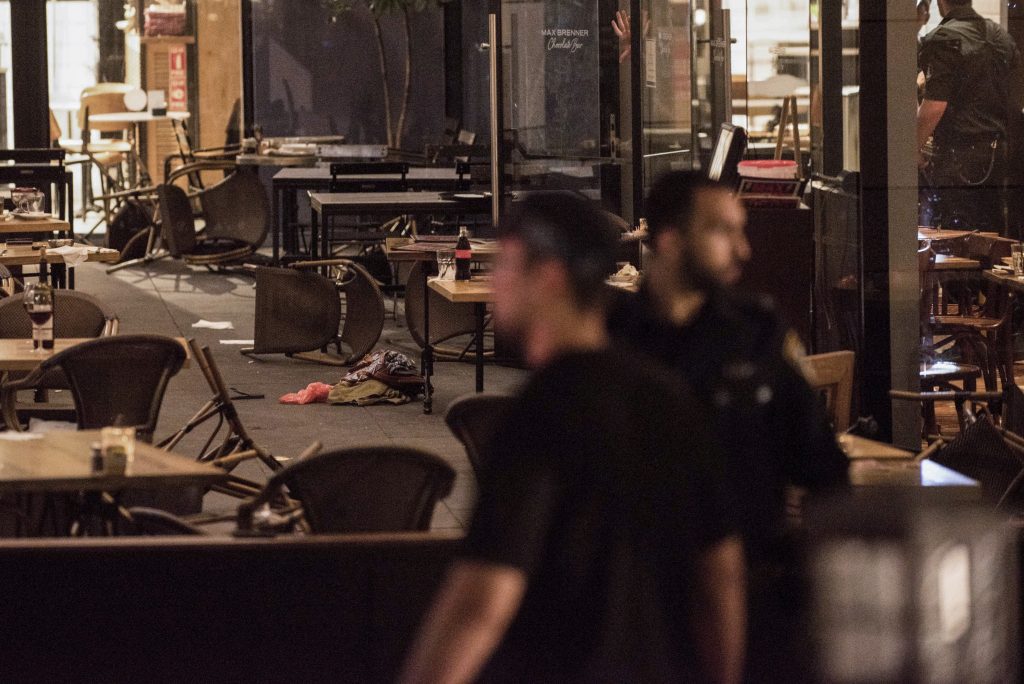 Wednesday night’s terror attack in Tel Aviv can be called an organizational failure, no matter how one looks at it. The fact that two terrorists armed to the teeth were able to get to the gates of Defense Ministry headquarters — located right across the street from the Sarona Market, where the attack took place — must be seen as a matter of grave concern, no matter how one looks at the situation.

Even worse was the fact that the two terrorists were able to conduct the attack, killing four and wounding 10 — and get away with it. They were not killed on the spot, but managed to leave the scene of the crime, and only later were they caught. Where was the security in one of the most crowded nighttime venues in Israel — the Sarona Market, replete with restaurants, eateries, and other places of entertainment? That, too, is a shocking failure.

Among the IDF’s tools to combat terrorism is a “pressure test,” a project called “Operation Brown” in which terror attacks are simulated in a number of venues and situations. Yet the project does not include scenarios for Tel Aviv. Why? Can anyone explain where all the top brass were when the time came to decide on whether or not Tel Aviv needed such a test? This, too, must be seen as a gross security failure.

After the attack, the Chief of Police in Tel Aviv said that there had been no reports that a terror attack was imminent in the city. Such statements are probably unwise at any time, especially during Ramadan, when there are many specific and concrete threats due to the increased motivation of terrorists to carry out attacks. Is Ramadan itself not enough of a “warning?”

Indeed, there are many unanswered questions about this attack — including the identity of the terrorists, who were apparently not known to authorities and were not involved in past crimes. All of them are part of the same family, from villages in the south Chevron Hills — an area that has been responsible for dozens of terrorists. Questions include how they got to Tel Aviv; how they did not arouse the suspicion of security guards; how they were able to enter the compound with their bags of weapons; how they were, it turns out, waiting around for something, as witnesses have pointed out, but did not arouse the suspicions of anyone and were not reported to police.

It also took rescue services, as well as large numbers of backup officers, several long minutes to arrive. Why? Witnesses said that when they did show up, rescue services and police officers seemed to be conducting their work in a disorganized manner, certainly not in the efficient manner one would expect under such circumstances. It is an indication that the system, at least in Tel Aviv, is not prepared for these kinds of incidents.

Ramadan just began Monday; we have a whole month of “tense Fridays,” incitement, angry Imams, and angry Palestinians in the streets to go. Palestinians know that Israelis have been congratulating themselves that “the terror wave has passed,” and that itself is a strong motivation for them to carry out attacks. Indeed, during the time that the Tel Aviv terror attack was taking place, there were another 20 incidents going on in Judea and Samaria, including rock throwing and firebomb attacks. The terrorists will now do everything they can to continue the momentum and to explode the myth that the new intifada has passed.

In light of all this, Tel Aviv should have been much better prepared to cope with an attack like this — and the rest of the country must be just as ready as well.

Im Hashem lo yishmor ir shav shakad shomer. Only the Al-mighty can offer us true protection from all types of dangers, and He alone can protect us. May we merit His protection.