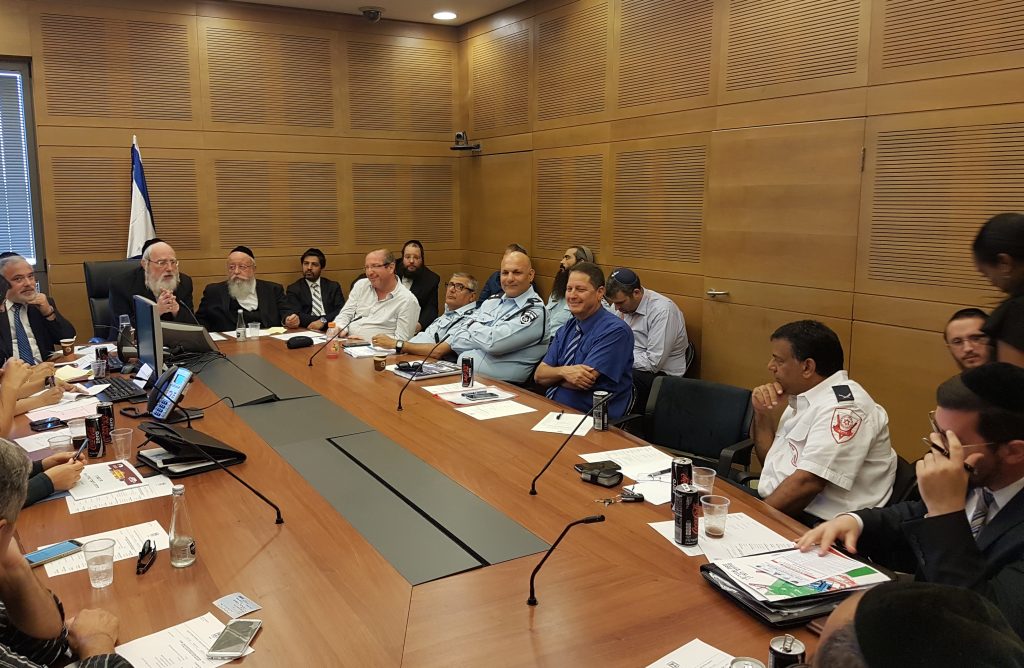 The Public Petitions Committee, headed by MK Rabbi Yisrael Eichler, convened to discuss and summarize the preparations ahed of Lag BaOmer, when hundreds of thousands are to travel to Meron. At an earlier meeting held by the committee in March of this year, issues were raised concerning the lack of cooperation between organizers and the lack of funds, lights, roads, parking places, benches and more. On Wednesday night, the committee convened once again to receive answers and summarize the preparations for Lag BaOmer. The CEO of the Ministry of Religious Affairs, the CEO of the National Center for the development of mekomos hakedoshim, officials of the police department, officials of the Ministry of Transport and the various Hatzalah organizations attended.

Committee chairman MK Rabbi Yisrael Eichler said at the opening of the meeting: “This year, the discussions were extremely optimistic – unlike previous years when everyone complained and threw the responsibility on the shoulders of others. This year, we received written responses and constant updates of the performance in the field. Concerns were raised at the previous hearing. This time there is a feeling of freshness and acceptance of responsibility and cooperation that the preparations were more organized, and I hope not to be proven wrong.”

“As part of a team led by me involving all the relevant factors, we formulated a budget of NIS 25 million. I’ve been told that at this stage in other years, preparations have never been up to where they are today.

“We put up light poles on Route 89 and Route 866 and many more roads that were not properly lighted. We expanded the parking lots significantly. We added benches, drinking facilities and rescue centers in all the parking lots.

“All tasks were carried out and we were on schedule. I’m optimistic. But we have to be careful. Certainly there may be problems. We have tried to anticipate them and prevent them. We have learnt a lot of lessons from the previous years.”

Senior director of public transportation at the Transportation Ministry Dror Ganon informed that as of next Wednesday afternoon buses will start to run from 14 destinations in the country, including two new subsidized destinations Beitar Illit and Modiin Illit. He said: “Last year, we finished the event with 7,000 trips and upward of 300,000 passengers. This year, we expect an increase of 15 percent. We almost reached the maximum capacity of buses in Israel! Eighty percent of the people use public transportation to get to Meron. We take nearly 1,500 buses from private companies. There will also be a lot of stations leaving the major cities; from Jerusalem itself there will be 7 stations. There are nearly 250 officials routing transport for the event.”

Officer Yossi Chemo, commander of police operations in the north, said that the police will deploy 5,000 officers throughout the week in Meron.

CEO of United Hatzalah Rabbi Ze’ev Kashash spoke of the cooperation with MDA, Ezer M’zion, Lev Malka and all rescue organizations. Hundreds of volunteers will be placed in mobile teams and dozens of motorcycles will be deployed on the mountain. They also built two medical clinics in case of emergency.

MK Rabbi Yisrael Eichler welcomed the cooperation and implementation of the Committee’s recommendations by the government, transport, police, the minister of religious affairs and the CEO, who devoted days and nights to prepare “Operation Meron.” He called on the public to pre-buy bus tickets throughout the week and not wait for the last minute. He also called on passengers to respect and honor the spirit of good drivers.

Another hearing will be held after Lag BaOmer to draw conclusions, with the hope that the public petitions will seek to congratulate the successes rather than complain about the failures again.