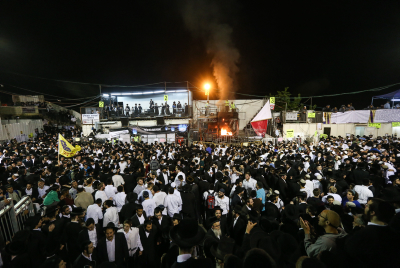 Although it is still two weeks away, police are preparing for “Operation Meron,” which will see hundreds of cops deployed to ensure safety and a smooth experience for the upwards of half a million people who travel on Lag BaOmer to daven at the tziyun of Rabi Shimon Bar Yochai in Meron. Especially involved are traffic police, who are putting the finishing touches on the master plan that will reroute traffic throughout the north, as well as ensure that those who do come by car are able to leave their vehicles in a safe place.

Those who come by car will have to leave their vehicles at large parking lots far from the tziyun, and will be transported to the site by shuttle bus – so it makes more sense to get on a bus from one of the pickup points in the center of the country to begin with, said Ilan Mor, head of traffic activities for police.

At a press conference discussing arrangements for Lag BaOmer, Mor said that “the rules that were in effect are in effect this year as well. We recommend that travelers use public transportation. Doing so is actually cheaper this year, since public transportation costs have fallen. In addition, we are this week completing construction of a new pedestrian bridge, which will make access to the site easier.”

In light of the unrest of the past six months, security is more of a concern this year than last, and Mor asked all those coming to Meron to keep their eyes open for questionable situations. “We cannot hermetically seal the area, but we will be on extra patrol and alert this year. The public will clearly notice the difference.”