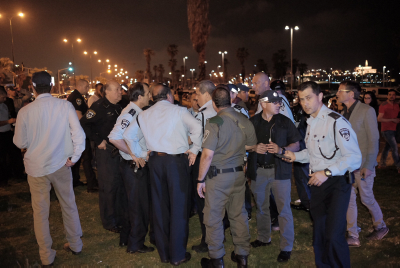 Yerushalayim prosecutors on Tuesday filed an indictment against Muhammad Awida, a resident of the city who transported the terrorist responsible for the stabbing terror attack at Jaffa Port in March.

According to the indictment, 30-year-old Awida was in charge of a car service that specialized in transporting illegal Palestinian workers to jobs in Israeli cities. In March, he took on a job to transport several individuals to a mosque in Jaffa – and one of the passengers turned out to be the terrorist who went on a stabbing spree along the boardwalk in southern Tel Aviv and Jaffa.

An American tourist, Taylor Force, was killed and ten people were injured before the perpetrator was eliminated. Force, a U.S. citizen, was a student at the Owen Graduate School of Management at Vanderbilt University in Tennessee. He was on an Owen school trip to Tel Aviv.

“The defendant’s careless actions caused much harm to Israelis and caused Force’s death,” the indictment read. “This carelessness was the result of his ignoring the law for many months, transporting illegal workers even during periods of high security tension. For money, he endangered the lives of Israelis.”

The defendant’s remand was extended at least until trial.