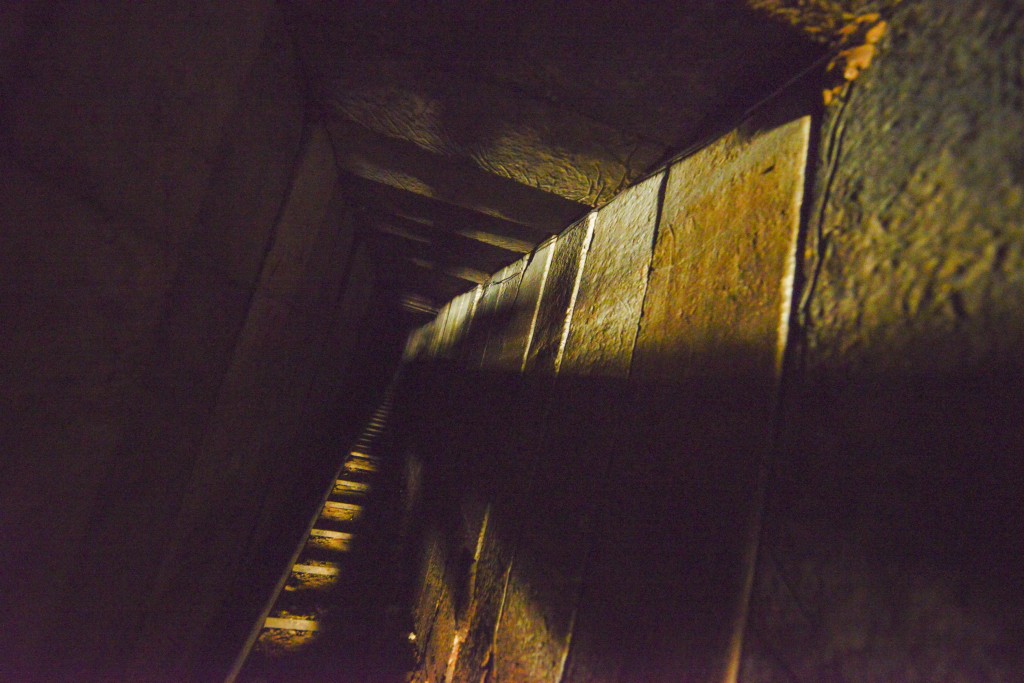 Hundreds, possibly thousands, of Palestinians, are engaged at this very moment in the construction of Hamas tunnels in the Gaza Strip.

These are defensive tunnels, from which Hamas officials can direct military operations in a future conflict with Israel. Thus protected from aerial bombardment, they can order attacks, in particular via cross-border offensive tunnels.

“The repeated rounds of fighting in the Gaza Strip forced on Israel by Hamas since 2009 have not achieved the necessary strategic goals: long term deterrence; severe damage to the Hamas military wing; the weakening of the organization; and effective constraints on its future military buildup,” says former Israeli military intelligence chief Amos Yadlin, in a comprehensive analysis of the situation.

“It is no surprise that Hamas, which is preparing for the next confrontation with Israel, is heavily invested in building tunnels,” says Yadlin. “Among the factors Israel must currently weigh, probably the optimal one for coping with the underground Hamas threat is technology, which would put off the inevitable military clash with the Gaza terrorists and would afford Israel an advantageous situation when it does come,” he stresses.

“But the fact that no such technical solution is ripe for use means a current dilemma about the proper course of action. Israel must establish that the discovery of cross-border tunnels ready for Hamas attacks requires preemptive action. If such action should escalate into a full-blown conflict, the conflict must be brief but forceful, based on a clear strategic objective that, unlike all previous military encounters, has the potential to effect a fundamental change in the balance of power and the dynamics between the sides. Any other choice will see Israel engaged in the same discussion in 2016 after yet another conflict with Hamas in the Gaza Strip.

“Operation Protective Edge (2014) proved that attack tunnels dug beneath the border of the Gaza Strip were almost the only strategic tool Hamas possessed to attain any significant gain, and most of its other so-called surprises and military efforts — long range rockets, UAVs, and naval commandos — failed. The tunnels, however, were a military tool that could potentially cause severe damage to Israel: in addition to operatives emerging from tunnels to kill Israeli soldiers, the very existence of the tunnels sowed concern among civilians in the nearby areas. Against this background, Israel was dragged into a limited ground maneuver, part of a 50-day confrontation that ended with no comprehensive agreement to demilitarize the Gaza Strip,” continues Yadlin.

“Current relations between Israel and Hamas are marked by a mutual desire not to be dragged into yet another round of fighting. For Israel, the desire to avoid escalation prevents it from confronting Hamas’s buildup openly and dictates a policy of imposed passivity, heightened by the difficulty in ensuring that provisions brought to the Gaza Strip, especially construction materials, are not used for military buildup — though it is highly probable that this is precisely the case. Moreover, while Ismail Haniyeh’s recent public statement about tunnel digging and the fears of Israelis living nearby have prompted renewed discussion of the tunnels, there is in fact nothing new about this situation. The only difference is how seriously the military and political echelons in Israel are finally starting to take the threat.

“The tools currently available to Israel are not sufficient to deter Hamas from continuing its military buildup, including tunnel excavation. While reconstruction activity might affect Hamas’s willingness to confront Israel militarily in the short term, it will not eliminate the organization’s military ambitions in the medium-to-long term.

“Therefore, the main issue for Israel’s decision makers is: What is the red line that, once crossed by Hamas, demands a proactive military operation against the tunnels? It seems that this red line should be the discovery of tunnels that cross the border, and/or the certainty, or very high probability, that Hamas has decided to embark on a military campaign against Israel in the immediate future.

“Over the years, when faced with emerging situations that it considered intolerable, Israel was prepared to take preventive or preemptive action. In this context, preventive action is an initiative to operate against the enemy’s strategic buildup of forces without having concrete prior information about the timing of the threat’s deployment and implementation. A preemptive action is also an attack in advance of an enemy attack, but it is taken when there is certainty about the enemy’s intention to use force in the near future.

“Preventive and preemptive actions are familiar concepts in Israel’s security doctrine, from the 1956 Sinai Campaign (a preventive campaign) and Operation Moked, which opened the 1967 Six-Day War (preemptive action), through the attack on the Iraqi reactor in 1981 and the 2007 attack on the Syrian nuclear facility, which was attributed to Israel (preventive attacks).

“But the spirit of the 21st century — i.e., intolerance in the international arena for offensive initiatives — and the changes in Israel’s strategic environment, as well as the fact that the enemy is often deeply embedded in the civilian population, have narrowed the scope for both preventive and preemptive actions and reduced their legitimacy. Indeed, in recent years there has been a debate about the need for preventive strikes against Hizbullah’s increasing military capabilities in Lebanon, which represent a far more potent threat than that posed by Hamas’s tunnels, and to date no action has been taken. Is the rationale vis-à-vis Hamas so very different?

“A critical factor that can help make the decision is the existence of high-quality intelligence. The lack of precise information about the location of the tunnels makes the issue theoretical, creating a situation in which the only way for Israel to take on the threat is to take over the Gaza Strip and inflict critical damage on Hamas rule, while risking international condemnation and extensive harm to civilians. Such a comprehensive act, which would mean occupying Gaza, is not recommended. A reliable intelligence assessment, on the other hand, affords several alternatives.

“The first is a case-by-case handling of cross-border tunnels that penetrate Israeli sovereign territory. Should any such be discovered, action must be limited and focused on those specific tunnels, supported by precise intelligence and backed by messages to Hamas that this preventive action reflects no desire for escalation. A second option is to deal with the problem systemically, including all tunnels within the 3–4 kilometer range of the fence — i.e., up to Gaza’s city limits. This is more extensive action, though also clearly circumscribed, based on the same plan for ground action that the IDF used in Operation Protective Edge. This alternative, and to a lesser extent the preceding one as well, carries a high probability for escalation and the outbreak of another large-scale round of fighting.

“Thus, Israel would do well to avoid both options and pursue a third alternative, based on restraint, technological response, and improved intelligence, with the intention to prolong the calm for as long as possible. Obviously, if a technology to identify and/or block tunnels is developed and deployed, it will be easier to adopt restraint and build preparedness for the next confrontation.

“Such technology would provide Israel with the breathing room it needs to prepare a plan of action against Hamas, knowing that the tunnels are no longer a strategic wild card as they are now – just as the Iron Dome system proved its strategic value thanks to its ability to eliminate almost entirely the threat of high-trajectory fire in most locations in Israel. One may assume that an underground version of Iron Dome would dramatically alter Israel’s opening position in the next conflict, making it imperative to find, as quickly as possible, the budgets that would enable the implementation of technologies to identify the precise location of the tunnels. But as long as such technologies are not yet operative and the intelligence detect signs of an imminent attack by Hamas, a preemptive strike is essential.

“While the alternatives cited above differ in their approach regarding a preventive or preemptive strike, they share one fundamental assumption: eventually, Hamas will force Israel into another conflict. Since conventional wisdom contends that a preventive strike is better, the first question, more important than the tunnels, is: what is the objective of the future round of fighting, and how prepared is Israel?

” The current strategic balance between Israel and Hamas is a failure stemming from the lack of a proper strategic objective in previous rounds of fighting. The manner in which Operation Protective Edge was fought did not seek to change the reality between the sides on the day after, so that Israel and Hamas stayed deadlocked in their asymmetrical strategic draw. The campaign failed to ensure any essential change in the situation over what existed formerly. Another round fought by the same rules is not recommended; it will only exact high costs from both sides while producing no positive results for Israel’s long term security,” argues Yadlin.

“Therefore, before Israel embarks on any campaign,” concludes Yadlin in his advice to the IDF, “it must answer the most basic questions about its operational goals and their feasibility. How can Israel inflict lethal damage upon Hamas’s military wing and thereby ensure better conditions when the fighting ends? How does Israel prevent Hamas from future military buildup? Is leaving Hamas in place as the go-to entity in the Gaza Strip in Israel’s best interests, or should Israel abandon that assumption and perhaps work to end Hamas’s rule of the Gaza Strip?

The optimal situation for Israel vis-à-vis the Gaza Strip entails a technological solution for Hamas’s attack tunnels. This would postpone the inevitable next round of fighting with Hamas and put Israel in a better position when it does break out. But the fact that no such technical solution is ripe for use means a current dilemma about the proper course of action. Israel must establish that the discovery of cross-border tunnels ready for Hamas attacks requires preemptive action. If such action should escalate into a full-blown conflict, the conflict must be brief but forceful, based on a clear strategic objective that unlike all previous military encounters has the potential to effect a fundamental change in the balance of power and the dynamics between the sides. Any other choice will see Israel engaged in the same discussion in 2016 after yet another conflict with Hamas in the Gaza Strip.”