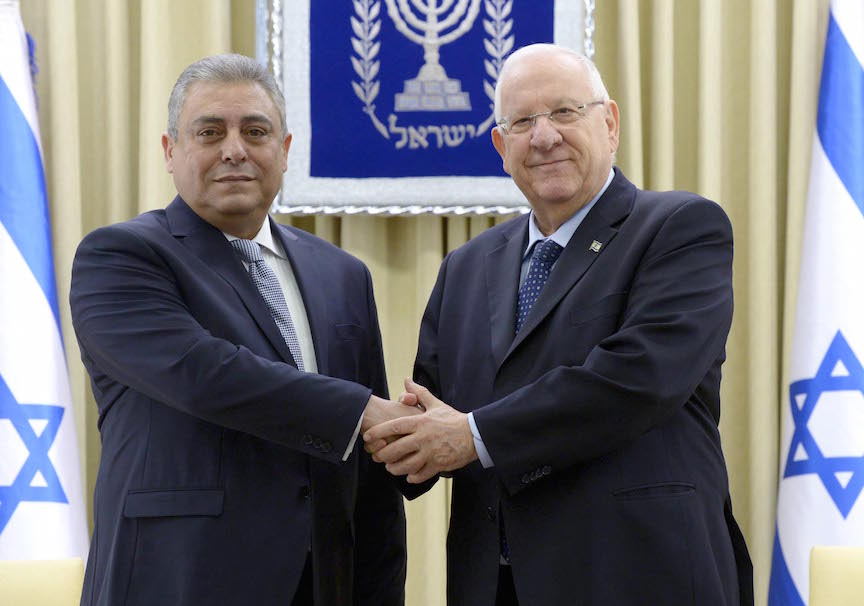 For the first time in nearly four years, Egypt has an ambassador in Israel. On Thursday President Reuven Rivlin during an official ceremony at his residence received the diplomatic credentials of the new ambassador of Egypt to Israel, H.E. Mr. Hazem Ahdy Khairat.

Egypt recalled its ambassador in November 2012, after Cairo slammed Israel for a raid on Gaza that killed top Hamas terrorist Ahmed Jaabari. At the time, Egypt was run by Mohammed Mursi of the Muslim Brotherhood, a close ally of Hamas.

Much water has flowed in the Nile since then; Egypt’s new leader, Abdel Fattah al-Sisi, has found much common ground with Israel, according to many reports – to the extent that Israel and Egypt are cooperating on fighting back the influence and strategic capabilities of Hamas and Islamist terror groups in Sinai.

Israel has had an ambassador in Egypt since mid-2013, after al-Sisi ousted Mursi, and last June Khairat, who just ended a stint as Egypt’s ambassador to Chile, was chosen for the job.

Speaking Thursday, Rivlin welcomed Khairat, saying that “it is very special to welcome ambassadors from our close and important neighbors. We live together in a difficult region. We have found a way to live together in peace and friendship. This is a message to the whole region, and the whole world. I was in Egypt during times of war, and I was in Egypt during peace. The peace agreement between our countries is an international treaty and it is for both us, a top priority. We may not agree on everything, but we respect each other and because of this we will build a shared future.”

Khairat thanked Rivlin and said that both Israel and Egypt “must take responsibility for the benefit of those who live in this region, to bring prosperity, justice, hope and equality.‬”