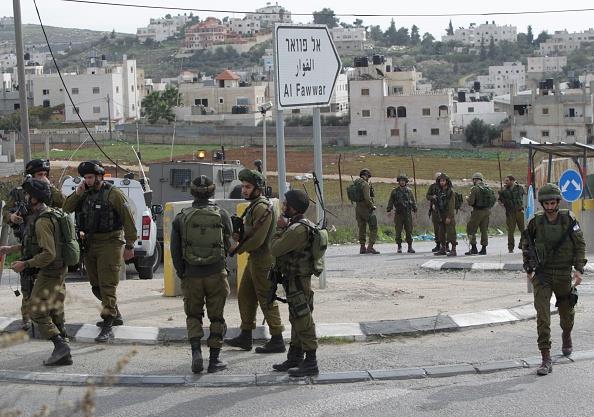 An IDF soldier was seriously wounded in a stabbing attack at the al-Fawwar junction in the South Chevron Hills on Wednesday.

Magen David Adom paramedics said the 20-year-old soldier had been stabbed in the upper body and was fully conscious when they arrived. He was evacuated to Shaare Zedek Hospital in Yerushalayim, where he was wheeled into surgery.

The assailant was shot by soldiers and died later in the day.

The attack took place where Kiryat Arba resident Avraham (Asher) Hasno, Hy”d, was run over and killed last month. The driver fled the scene at the time but later turned himself in to the Palestinian police. He told authorities he didn’t mean to hit Hasno, a claim Hasno’s family firmly rejects.

Earlier Wednesday, Arab snipers fired shots at Israeli vehicles parked outside Me’aras Hamachpeilah in Chevron. No one was hurt in the attack, but several cars were damaged. The shots were fired from an Arab neighborhood overlooking the site.

Security officials are facing mounting public pressure to bring the violence to an end, particularly in the Gush Etzion and Kiryat Arba areas, which have been targeted repeatedly in recent weeks.

Davidi Perl, head of the Gush Etzion Regional Council, said after Sunday’s murder of Hadas Burchris, Hy”d, that “once again we have experienced a terror attack by Palestinians. Unfortunately, the defense establishment does not yet realize what we are up against. We must go into the villages and overturn every stone in order to find and confiscate their weapons, to once and for all eliminate terror, as they did in Arab neighborhoods of Yerushalayim. Our coexistence with the Palestinians is blowing up in our faces,” he added. “It appears that there is no choice but complete separation from them.”

Defense Minister Moshe Yaalon informed the Knesset on Wednesday evening that the security establishment has decided to construct a fence  separating Chevron and the nearby Israeli city of Kiryat Gat.

The disclosure came in response to a motion filed by Likud MK Mickey Zohar in light of the deteriorating security situation in Kiryat Gat, where multiple terror attacks have occurred in recent months.

“We are aware of the issue of the fence, and now with the budgetary approval for the massive fence we plan to build one similar to the border fence with Egypt — it will take some time but it will happen,” Yaalon promised.

In another terror-related development, a Yerushalayim court on Wednesday extended the remand of a Palestinian man who was apprehended the day before by an alert security guard before he could execute a terror attack at the Central Bus Station.

Information on the attempted attack was cleared for publication Wednesday after the court extended the remand of the would-be murderer by five days. The terrorist is a resident of the Old City.

Police said that the security guard, who works on the Yerushalayim light rail, observed the Arab terrorist near the train as he moved along Yaffo Street, outside the bus station. The Arab raised the guard’s suspicions, and he demanded that the Arab identify himself and submit to a body search — during the course of which the Arab pulled out a large knife. Security forces quickly subdued him.

During questioning, the 19-year-old admitted that he had planned to carry out a terror attack. He had brought the knife from home and hidden it at his place of work in a Jewish neighborhood of the city, planning to carry out the attack when he quit work that day.