Israel These Orphans Belong to All of Am Yisrael
Israel 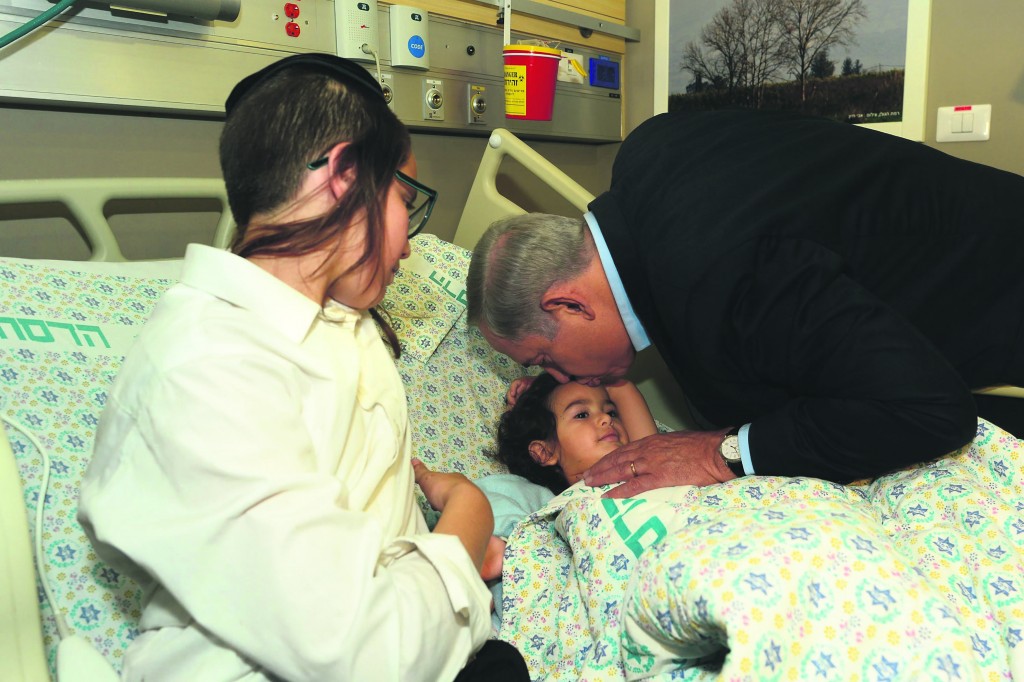 Yom Tov in Eretz Yisrael is pure pleasure. This Sukkos, it was pleasure mixed with grief. It was repeat visits to the Har Hamenuchos cemetery in Yerushalayim for tens of thousands of people who came dressed in their Yom Tov finest, some holding their arbaah minim, to grieve for the four kedoshim who were taken, and cry for the 13 orphans who were left behind.

At the first levayah, for Rabbi Eitam and Naama Henkin, I spotted several others who had lost children or siblings to Arab violence. There was Mrs. Rachel Frankel, whose son was one of the three boys kidnapped and murdered last summer, and the older brother of Immanuel Moreno, the legendary Sayeret Matkal commander who fell in battle deep inside Lebanon 10 years ago. I’m sure there were many others.

It’s like there are three interconnected circles surrounding the Henkins. The immediate family, the family of shechol, of grief, who knows what they are going through and wants to be there for them, and the rest of us, the family of Am Yisrael, which includes Jews everywhere, who are embracing them with heartfelt concern.

How utterly sad that a brilliant young scholar, seen by many in his family as the natural heir to his famous great-grandfather, Harav Yosef Eliyahu Henkin, zt”l, was taken in this way, during Zman Simchaseinu. How tragic that four young children — Matan, 9, Nitzan, 7, Neta, 4, and Itamar, 4 months — witnessed their parents’ murder. How unnatural that parents are not only burying their children, but are left to raise the grandchildren.

Rabbanit Chana Henkin, the renowned educator, was the first to eulogize her son, Eitam. She began by apologizing to the huge crowd for the delay, for being forced to stand in the sun for so long. But the police forensics experts wouldn’t release the bodies before completing all of their procedures.

She spoke of her son’s modesty, his middos, his scholarship. “We had a special language between us of Torah and Halachah,” she said. “You continued in the Torah ways of your father and grandfather with talent, with integrity; you were a man of Torah in all things.

“You wrote a book on Halachah in your 20s; people did not believe you were so young,” she continued.

Referring to the children who were in the backseat of the car, she said, “The children were saved by a miracle. The 4-month-old baby will not remember his mother’s love, but I hope the rest of her children do. She was a very special woman; a wonderful mother.”

She later told reporters that the two families, the Henkins and Armonis, from Peduel, a settlement in the Shomron, would be meeting to decide how and where to raise the four children. “We will try to find the best way to protect them and raise them the way Eitam and Naama would have liked,” she told Yediot Aharonot. “They are smart children who understand what’s happening around them.

“It’s important for me to stress that we have suffered a huge family loss. But Am Yisrael has also lost out on such impressive figures. The four children have become the children of Am Yisrael.”

(It appears that the children will be living in Peduel, a very supportive, tight-knit community. The grandfather-turned-father, Chanan Armoni, was wounded in the attempted rescue of Nachshon Wachsman, Hy”d, 21 years ago and served as a very senior official in the security forces.)

Rabbi Yehudah Henkin, who learned with his grandfather b’chavrusa for five years, accepted the Divine decree, but admitted, “I don’t understand G-d’s deliberations.” He lost more than a son; he lost his closest talmid, a serious talmid chacham who by the age of 31 had written three sefarim, including one on hilchos Shabbos, and more than a dozen scholarly essays.

The levayah was brought to an end by the heartrending Kaddish of 9-year-old Matan, whose young, confident voice never wavered.

The shivah house in Kiryat Moshe saw a constant stream of people, including leading Rabbanim. The stories told by his friends and colleagues reinforced the image of Eitam as a modest, brilliant scholar.

“He was destined to be one of the Gedolei Yisrael,” said his former Rosh Yeshivah, Harav Dov Lior, of Kiryat Arba.

Rav Nechemia Lavi, 41, Hy”d, was sitting in his sukkah, giving a dvar Torah at seudah shelishis, when he heard the cries for help outside his home in the Old City of Yerushalayim.

He didn’t hesitate. He left the table and ran to help, only to be stabbed by a terrorist who then stole his gun.

Yosef Bruce, who learned at Ateret Cohanim in the Old City for nine years and worked there another four and a half years, knew Rav Lavi well. He describes a man who was modest and who radiated a love for Torah.

“He loved everyone and was very loveable,” Bruce told Hamodia. “His middos were so refined. He never complained. He only saw the good in anything that happened.”

He was extraordinarily versatile in his ability to teach children and youths of all ages. He was a mechanech at the Moriah Talmud Torah, teaching children in grades one through eight, and taught 19 year olds at Ateret Cohanim, boys in Shiur Alef and Beis who needed extra help.

“He radiated a love of Torah,” recalls Bruce. “He transmitted that love to his students.”

“He could have stayed home and protected his family,” notes Bruce. “But he ran outside because a fellow Jew who had come to the Kosel was in trouble.”

Another former student, Itti Essman, recalled Rav Nechemia’s method of learning. “It was very thorough. Every Rashi, every Tosafos and every single word in the Gemara were so beloved to him, and he was careful not to miss a letter and its meaning.

“Instead of ‘extraordinary’ stories, I remember his middos of every day: warmly greeting everybody, helping whenever requested; whenever he was asked a question he went to all means to find a solution that was understood by the boy who asked.

“His home was always open wide for the boys and other guests; everyone felt like a member of his family. Being a baal teshuvah I didn’t always have where to stay on an off Shabbos or Yom Tov, and Rav Nechemia invited me many times — together with other guests — for Shabbos and Yom Tov, telling me that I was welcome to come whenever I want.

“How much light was in his own house — it is impossible to describe.”

Rabbi Aharon Banita (Bennett), 21, Hy”d, initially from Canada, was returning from the Kosel at the end of Shabbos with his wife, Adele, the daughter of Harav Yosef Gal, and their two children, a 2-year-old son and a 1-year-old daughter.

They were attacked by an Arab terrorist in the Old City of Yerushalayim. Bennett was killed, his wife was seriously wounded and their son was lightly hurt.

Rabbi Banita learned in Yeshivas Shuvu Banim and was known for his deep love and commitment to Torah.